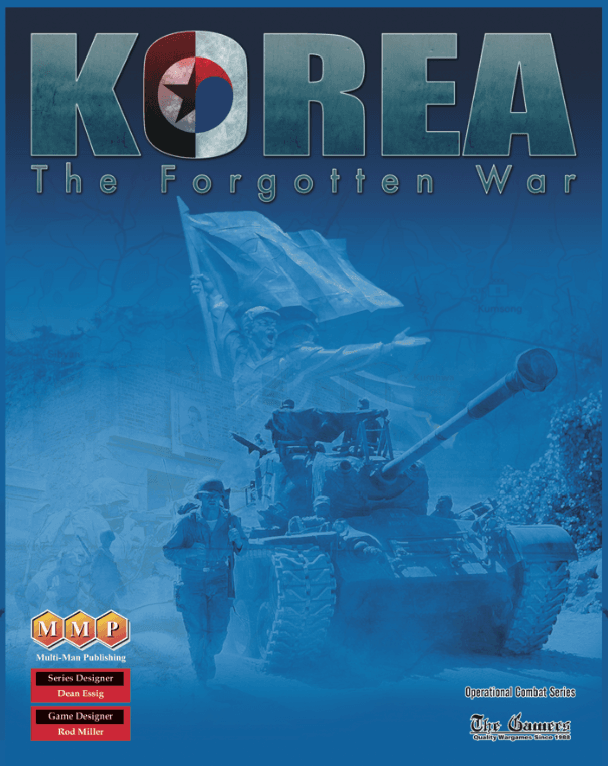 Korea: The Forgotten War, Is the ninth game in the Operational Combat Series (OCS) release by The Gamers. The Korean War stands as a key event in world history. The first shooting confrontation of the Cold War, and the first limited war of the nuclear age, it is the only time since the Second World War that two of the world's major military powers fought one another - in this case the United States and China. Diplomatically, the war offers an interesting view of the miscalculation and ineptitude on both sides that led to open conflict. It also brings to light the United Nations' first opportunity to play a leading role in world military events. Korea: The Forgotten War covers the first year of the war and highlights the mobile phases of the battle. Campaign victory is determined most often by the stable positions of the lines (relative to the "neck" of the peninsula). A number of shorter scenarios are also included to allow players to explore specific operations or to use as a training scenario before taking on one of the campaign games. Korea: The Forgotten War was initially released in 2003. The 2014 (2nd edition) is a reprint of the 2003 (1st edition) with changes made to address errata and to better conform to the latest version of the OCS rules when printed. Korea: The Forgotten War has 15 scenarios broken down as follows: 5 1-map scenarios 4 2-map scenarios 6 3-map scenarios Game Scale: Turn: Half-week Hex: 5 miles / 8 Km Units: Battalion to Army 2014 Game Inventory: Three 22 x 34" full-color mapsheets Four dual-side printed countersheets (2 combat, 2 markers - 560 1/2" counters) One 48-page OCS v4.1a rules booklet One 40-page Korea v2.0 game specific rules booklet Two 4-page OCS v4.1a Charts & Tables Folders Two dual-sided Player Aid cards Two 6-sided dice Complexity: High Solitaire Suitability: High Playing Time: 4-100 hours Players: 1 or more