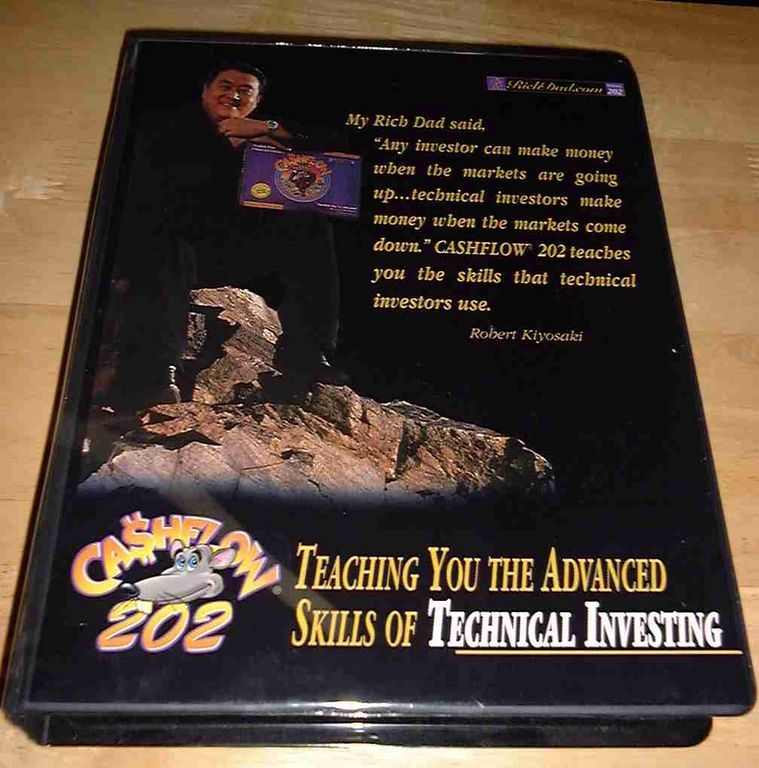 Cashflow 202 is an expansion to Cashflow 101 that focuses on Technical Investing including a simple system for options and short sales. The expansion pack is a new set of four decks of cards and new player sheets to handle the new investments possible. It is unplayable without Cashflow 101. Components: Capital Gain Deal cards replace the Small Deal deck. Cash Flow Deals replace the Big Deal deck. A new deck of more punishing Doodad cards replaces the 101 Doodad cards. 42 Market cards replace the 101 Market deck. Stock shorting envelopes for each player for the two major stocks players can make short sales in. (Unfortunately with glue still on the envelope flaps that people will invariably forget and lick shut.) (4 cassette tapes on investing.) Major rule changes Market Deck is now reshuffled after drawing 25 cards, removing the guarantee that all Market cards will be played. Also, a new rule exists that attempts to fix how the Market deck was under drawn with 2-4 players. Now landing in the Rat Race on either an Opportunity or Market space causes you to draw both a Deal card (your choice still large or small) and a Market card each time. In the Fast Track, landing on a business you already own allows you to franchise it. Pay the down payment, add an additional token, and receive the additional cashflow listed on the board again. Players not only start by filling out their sheet with a ?career? as before, but also randomly draw a starting investment portfolio as well. The game is definitely more chaotic and not as idiot-proof as Cashflow 101, and investments can be entirely wiped out. The game teaches gambling theory and cash management. For instance, if a bet only wins 1 in 20 times, but pays off 50:1 when it does, this is a good bet. The issue then is cash management through the losing cycle placing bets steadily while waiting for the payoff.