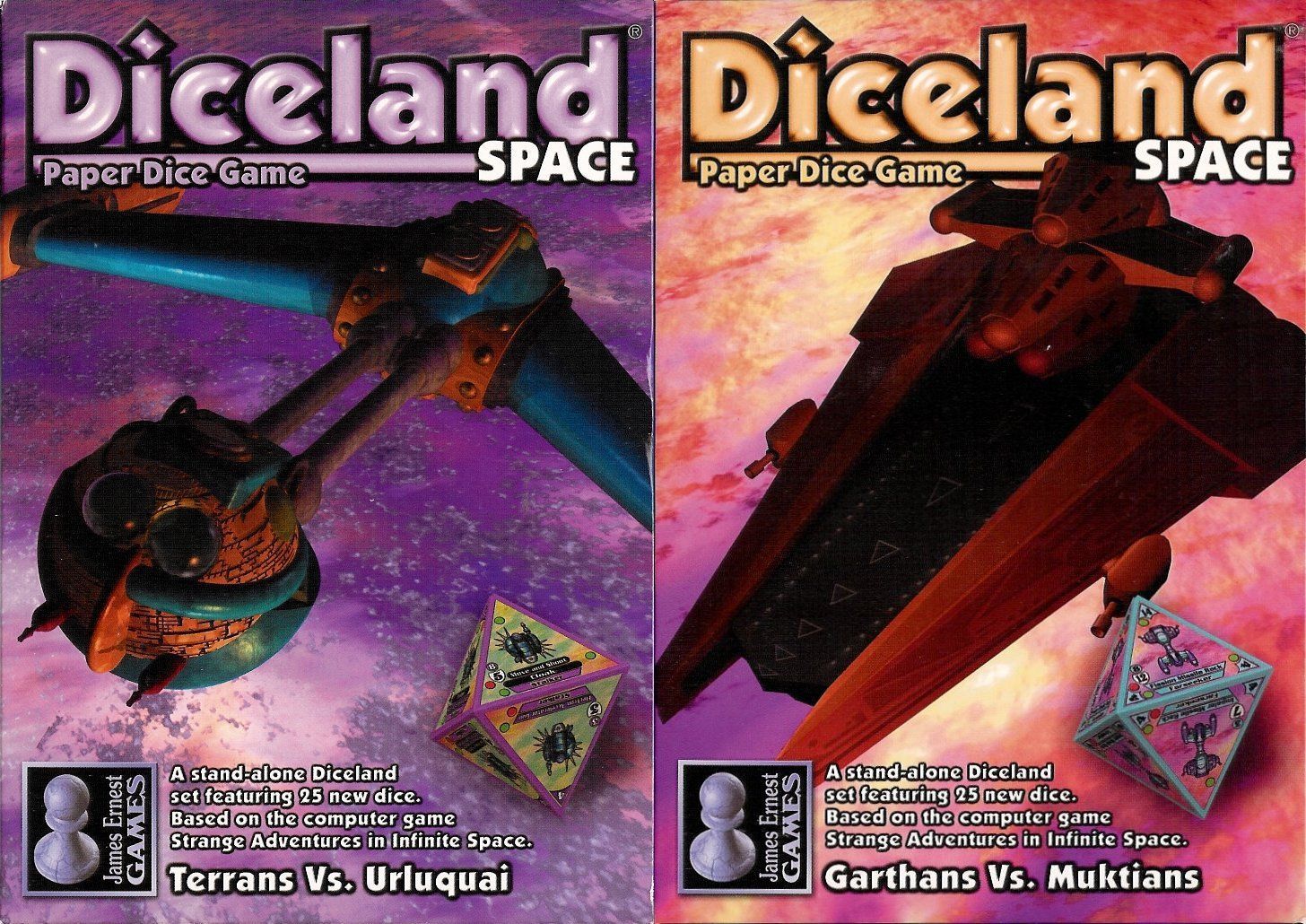 Diceland: Space uses the same basic mechanics as Diceland: Deep White Sea, although the setting details are starkly different. Using content from their Strange Adventures in Infinite Space computer game, Cheapass has made the new Diceland into a ship-to-ship combat game. From the Cheapass Games website: Diceland is a tabletop combat game that uses paper dice as the characters. The dice are eight-sided, printed in full color, and about 2 inches to a side. Each die is pre-cut and scored, and assembles with just tabs and slots. The "paper" in these paper dice is 12-point coated cardstock, which makes these dice solid enough to withstand any amount of normal play. Diceland: Space is a 50-die expansion for Diceland, which comes in two different 25-die boxes. The set introduces new abilities like Cloak, Remove, Dodge, and more, and gives players their first chance to construct customized Diceland armies. Each box contains two major armies, one smaller one, and a strange and wonderful 25th die. Space: Terrans vs. Urluquai includes an 11-die Terran army, featuring a fast-moving wing of Scouts and a powerful 15-point Destroyer; the 8-die Urluquai army including both a Corvette and a Fighter with the Cloaking ability; and the 5-die Zorg army, with a fat carrier and a unique Tender which can teleport enemies off the board. Also in the Terrans vs. Urluquai box, you’ll find the friendly Klakar Frigate, an impressive 16-point frigate that’s a perfect addition to any army that can afford him. Space: Garthans vs. Muktians includes an 11-die Garthan army, featuring both the Light and Super Carriers as well as a vast array of small Fighters; the 8-die Muktian army featuring a mix of unusual ship designs; and the 5-die Tan Ru army, featuring a powerhouse 15-point Decimator and a wing of three mindless Drones. Also in the Garthans vs. Muktians box, you'll find the 50-point Yellow Kawangi die, a bizarre and powerful die that's sure to be illegal in tournaments any day now. List of Diceland sets and armies