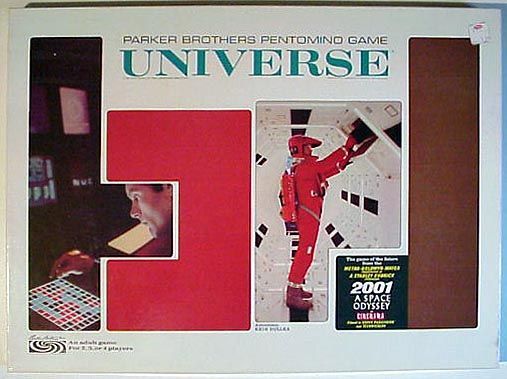 Parker Brothers pentomino game for 2 to 4. Play the last piece to win the game. This game is an updated version of the earlier Pan-Kai by the same author, to which Universe adds the three and four players variants. The game box featured publicity stills from the movie "2001: A Space Odyssey." In the movie, one of astronauts plays Universe with Hal (the computer). This scene was cut and replaced with Dave playing Chess with Hal. The director thought it would be more understandable by the audience. The game doesn't mention puzzles, but there are plenty of patterns to try to make with the pentominoes. For example, form a 5x12 rectangle, or a 6x10 rectangle, with one set of pieces. The two player form of this game was published in 1961 as Pan-Kai