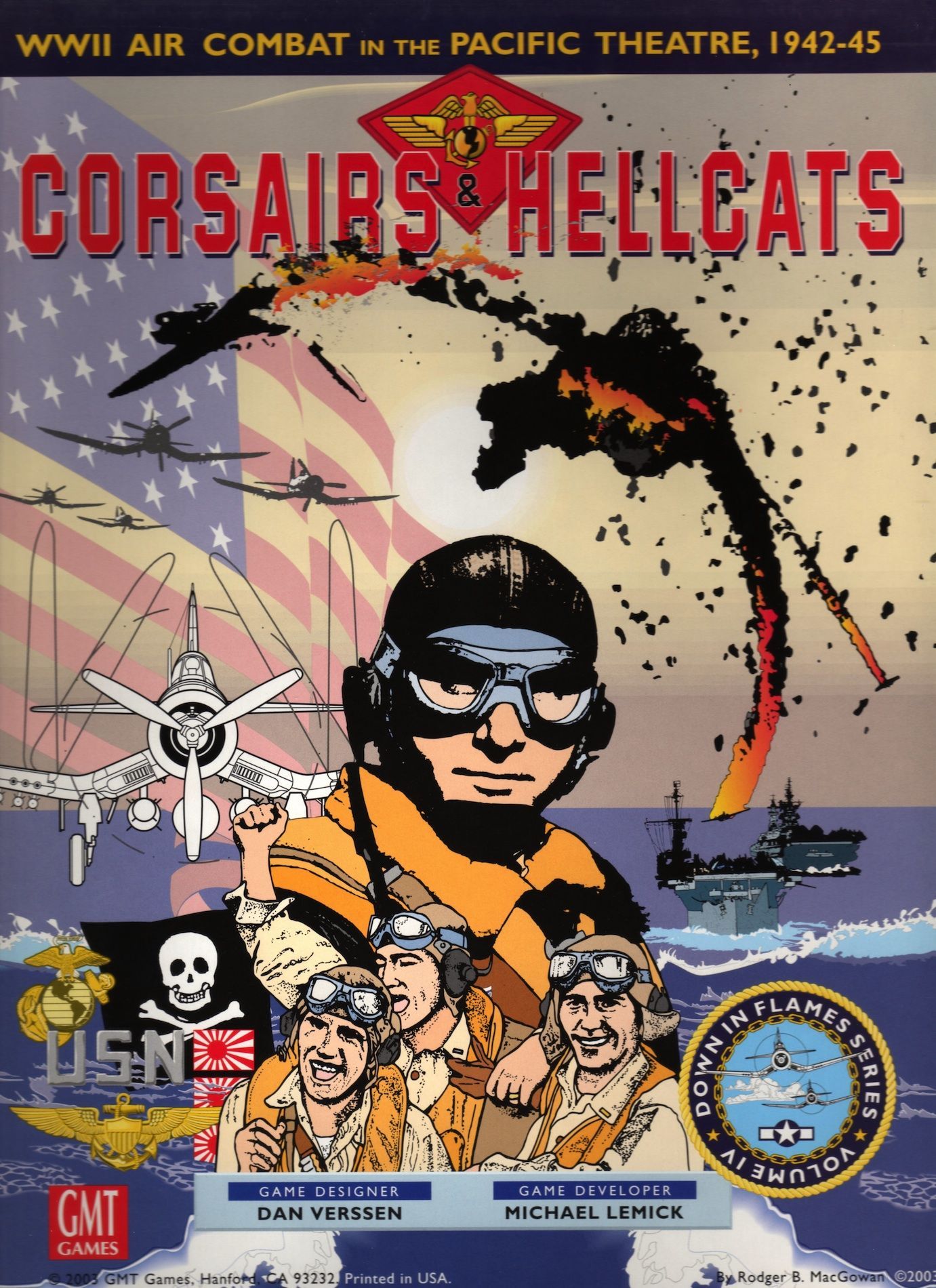 (from GMT website:) Volume IV in the Down in Flames card game series covers World War II in the Pacific from mid-1942 until early 1945, starting where Volume III (Zero!) left off. Corsairs & Hellcats is a DiF Gamette, including all of the major late war aircraft types developed by both sides (Zero! is required in order to play this gamette). Allied players can fly the game's namesakes, the F4U-1 Corsair and F6F Hellcat, as well as the British Firefly, the P47-N, and the P-61 Black Widow. Japanese players can counter with two models of late war Zero, the Ki-84 Frank, the N1K1 George, and the J2M Jack. New bomber types include the TBF Avenger, the B-29 Superfortress, and the Ki-49 Helen. There's even a new kind of bomber: the Attack Bomber, which can strafe and bomb. Two types are present in Corsair & Hellcats: the B-25C-1 field modification and the solid nose B-25J, which carried a dozen (!) fixed forward-firing .50 caliber machine guns. All of these aircraft (plus many of the ones in Zero!) are used in seven new campaigns. Eastern Solomons and Santa Cruz are carrier campaigns like those pioneered in Zero!. Solomon Islands, Philippines 1944, and Okinawa use the land campaign structure familiar to players of the previous games in the series. The other two campaigns are quite different, though. Guadalcanal models the drawn out struggle for control of the airspace above that island. Players allocate available aircraft to two missions each week in an attempt to force a withdrawal by their opponent. The campaign also includes the option to play the Eastern Solomons and Santa Cruz campaigns as part of the battle, feeding the results of the carrier encounters back into the main campaign. B-29s in China is a solitaire campaign representing the beginning of the strategic bombing offensive against Japan. The player controls three Superfortresses and must balance their activities between training, carrying supplies, repairing damage, and conducting bombing missions. In addition, Corsairs & Hellcats includes new target types, skilled pilots, and ordnance. The game also has rules for Kamikazes, supply drops, submarines, and mine laying. There's even a new method of selecting skilled (and green) pilots and crews that reflects the changes in aircrew quality that both sides went through during the course of the war. Are you ready to relive history? Can you sweep the skies in the cockpit of your Corsair or Hellcat? Pilots, man your planes... NOTE: In order to play Corsairs & Hellcats you must have a copy of Zero!. CONTENTS: 88 full-color, die-cut counters 124 full-color Playing Cards 7 Campaign Map Displays One Player Aid Card One Resource Sheet 6 Target Displays 4 Campaign Logs 16-Page Rules Booklet Designed by Dan Verssen Developed by Mike Lemick