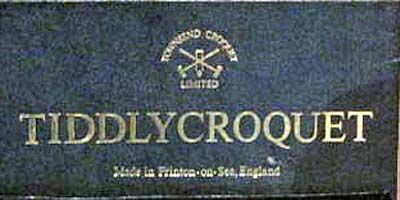 Tiddlycroquet is played to rules similar to outdoor croquet. The only changes are to allow you to use counters rather than balls. The object of Tiddlycroquet is to be the first to get your small counters through all the hoops in the correct order and direction and then hit them onto the peg. The hoops are set out on a table or other hard surface in a set pattern (or create your own). Two to four people can play, or with 2 or 4, play with all counters or as partners, choosing which of the two counters to flick on your side's turn. When your counter hits any other counter, called a 'roquet', you place your counter on top of the counter it hit, and flick the two together, called 'taking croquet'. You then flick your counter once more. If you flick either counter off the table your turn ends. If you flick your counter through a hoop, you get another turn--and more chances to 'roquet' the other counters.