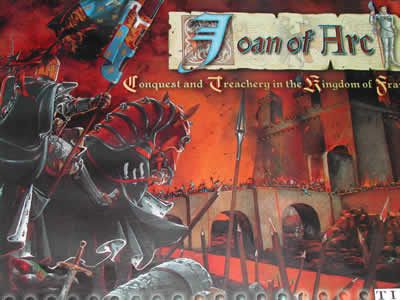 Joan of Arc, a game of "Conquest and Perfidy in the Kingdom of France", deals with the conflicts in France during the Hundred Years' War. It's a multiplayer wargame with a card-driven combat system and a political layer that players must contend with. For just over one hundred years England and France battled over who would sit on the French throne. Even within France itself factions developed, putting forth their own candidates challenging the rights of the Dauphin. From this struggle heroes emerged, notably the Black Prince and Jeanne d'Arc, The Maid of Orleans. Tremendous battles were fought at Crecy, Poitiers and Agincourt, yet their impact on the war was ephemeral. Long sieges followed short campaigns, bands of the notorious Free Companies, temporarily unemployed, marauded across the countryside in search of rapine and plunder. Complicating matters, both famine and plague poisoned the seasons. All in all, 'twas a grand time! Components: 1 mounted game board 80 cards (a la Tarot) 20 resin cast castles and 10 resin cast strongholds die-cut coin markers and garrisons representing the factions of France, England, Navarre, Brittany, Flanders and Burgandy. Sequel Renaissance