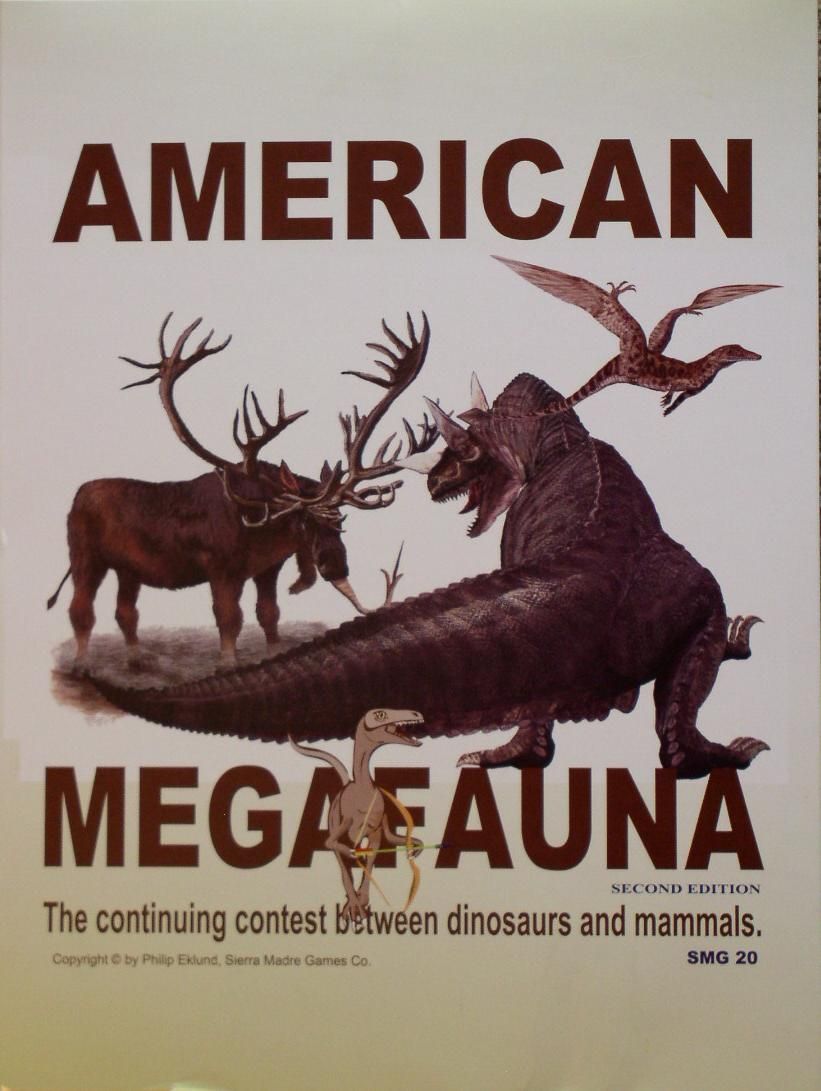 From the designer/publisher: A quarter of a billion years ago, an unknown catastrophe engulfs the Earth. The swamps and ice caps of the Permian are replaced by the blistering deserts of the Triassic. On both land and sea, 96% of the animal species die. In the corner of Pangea that will be known as America, small survivors cautiously sniff the post-holocaust air at the dawn of the Mesozoic Era. Some of these unspecialized quadrupeds have sloppy ever-replacing reptile teeth, these will be the dinosaurs. Others have sculpted "one-shot" teeth, these will be the mammals. The victor in this titanic ecological struggle will determine the masters of the planet. Clearly, the ruling reptiles triumphed since that day, 248 million years ago, and dominated for 170 million years. Only to be overthrown, in what must be the upset of the eon, by the mammals. Yet the contest is not over. American Megafauna pits dinosaurs against mammals in ancient America. The game is designed for two to four players, from ages 9 to adult, or can be played solitaire. It recreates the titanic contest of these two types of prehistoric beasts from the Triassic to the present. This is a game of ecology, evolution, and DNA. Players start as one of four nondescript archetypes, but can branch out to new species from this basic type by bidding on genotype and DNA cards as they are revealed. For auction "currency," players use gene coins from a "gene pool." DNA cards allow players to create strange animals, from cud-chewing crocodiles with antlers, to saber-tooth meat-eating camels. In the advanced version, the continent of Laurentia is occasionally flooded or glaciated; greenhouse levels change; and the three Milankovich cycles are handled by cards that occur with historical probabilities. Biome cards, including cicada prairies, mountains, ice sheets, and mangrove swamps, appear on the map in succession according to "climax" ratings. Expanded by: American Megafauna (second edition) Expansion Set Re-implemented by: Bios: Megafauna