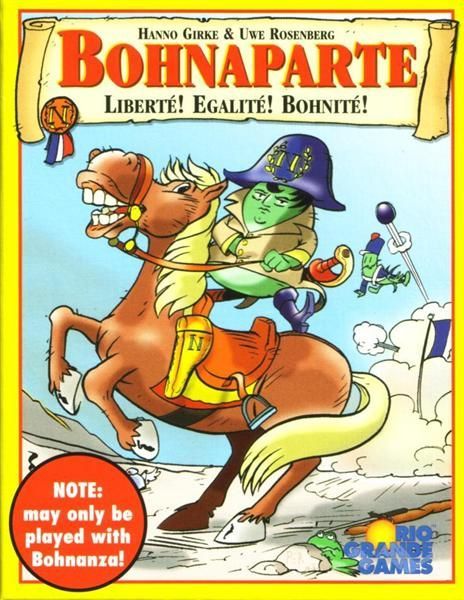 Bohnaparte conquers the Bohnreich! The fourth Bohnanza expansion from Lookout Games (in a limited sales edition of 2500 pieces) puts you in the Bohnreich! Plantations, villages, cities, fortresses -- and 3 to 5 generals, who want to bring these under their control. The Bohnanza base game is needed. Using new cards in Bohnaparte, the Bohnreich is laid out; each player receives counters of his own color; and play then loosely follows that of normal Bohnanza, with a small difference: earned bean coins are not saved but are used to finance your conquests throughout the Bohnreich. At the end it matters only who has the largest part of the Bohnreich under control. Battling is accomplished using the numbers on the bean cards, which gives new significance to the formerly "weaker" bean types. Designer Hanno Girke describes the expansion set as "Bohnanza meets Risk". Includes 33 cards, 60 game markers, and rules. Graphics by Marcel-Andre Casasola Merkle. The AMIGO-Edition of Bohnaparte includes 50 Cards, 72 game markers and rules.