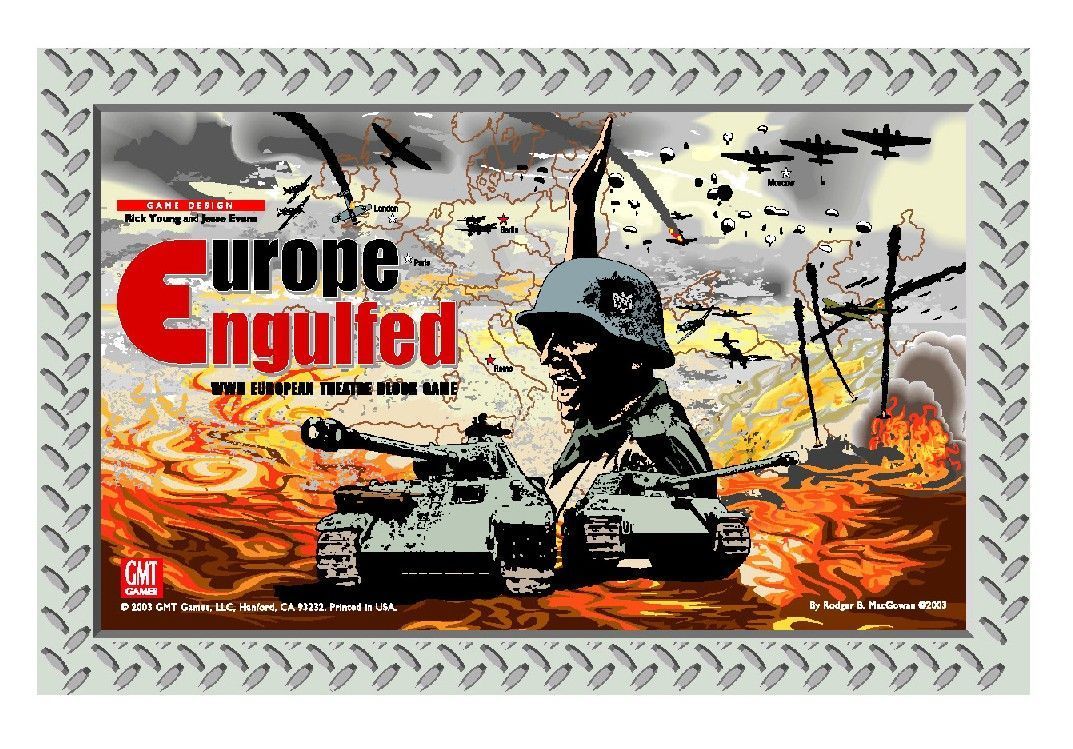 from GMT website: More than thirteen years of design and development have gone into the making of Europe Engulfed (EE), which is GMT Games' first offering to the block-game enthusiast. It covers the entirety of World War II in Europe from September 1939 to the end of 1945. Europe Engulfed plays fast with its focus on playability and making players feel the pressures their historical counterparts were under. The game achieves this level of playability without sacrificing historical detail. The entire campaign is playable in a single 10-to-14 hour day once players become familiar with its elegant game systems including: Wood Block Units: Wood blocks for land units provide a realistic fog of war. Only the controlling player can see if their units are armor or infantry, weak or strong until combat is engaged. The inability to know the strength of your opponent ensures that even the most experienced players will make their fair share of tactical and strategic errors. Production and Strategic Warfare: Europe Engulfed Game Turns represent two months each and production and strategic warfare takes place within each of these turns. The inventive production system shows that the conquering power does not get the same value out of resource areas as the original power that lost them. Production levels are easy to calculate and production choices include special actions, fleets, U-boats, strategic fighter and bomber assets, ground-support units, flak, V-weapons, and, of course, lots and lots of armor and infantry and the odd paratrooper or cavalry unit from which to choose. Special Actions: Special actions are an innovative rule system to account for the large historical territorial gains that occurred over the course of a two-month game turn without bogging the game down with multiple player turns. Using Special Actions, players can purchase additional movement phases and combat rounds, amphibious and airborne assaults, and even take actions during an opponent's combat phase. Rulebook and Playbook: The 24-page rulebook is clearly written with many examples. Also included is a 24-page playbook. The playbook includes player notes, designer notes, optional rules, scenarios, index, and an extended example of play highlighting the May/June 1940 turn which reveals tactics for successfully attacking and defending. Europe Engulfed plays quickly with a very historical feel. Many players have indicated that they actually feel the pressures and stresses felt by the strategic level commanders in the real war. We know of no other European Theater of Operations game that plays this fast and with this much historical value. Play Times: 1939 Campaign: Up to 14 hours 1941 Campaign: Up to 10 hours Blockskrieg!: Up to 6 hours European War: Up to 5 hours '42 - '43 two-map scenario: 4 hours '42 - '43 one-map scenario: 3 hours Patton's Fantasy scenario: 2 hours Integrates with: Asia Engulfed