We the People - Universal Statistics 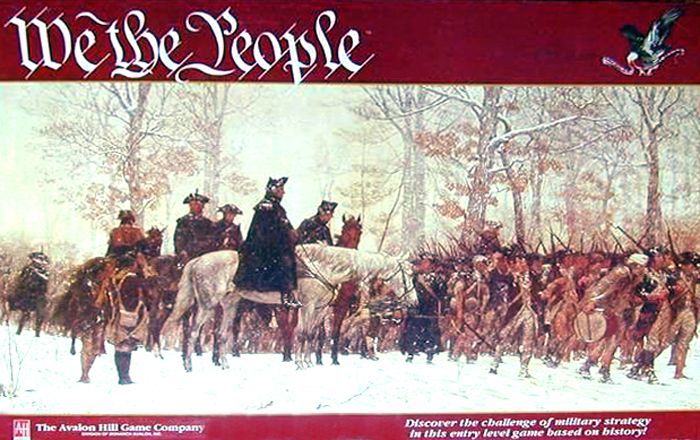 This game was the first in what has become a very popular trend for wargaming. The typically hex-based maps were simplified into an abstract system of connected spaces, which are used for army movement and to keep track of who controls the provinces politically. The armies themselves are greatly simplified, but the general in charge of the army gains much importance through his ratings for combat effectiveness and overall strategic effectiveness. Typically, dice are used to resolve conflicts between troops, however a deck of battle cards are used instead, which captures the feel of conflict much better and gives approximately the same results seemingly without the bitterness that accompanies skewed die rolls. And lastly, the overall ebb and flow of the game is determined through the play of strategy cards, which ostensibly mark certain historical events during the Revolutionary War, but each card has multiple purposes depending on which side is attempting to use it. A complete game of WE THE PEOPLE includes: One 16" x 22" Map 50 Round Playing Pieces 14 Rectangular Playing Pieces 66 Hexagonal Playing Pieces 2 Square Playing Pieces One 8 1/2" x 11" Player Reference Card One Rules Booklet One Historical Commentary Booklet 96 Strategy Cards 64 Battle Cards 13 Plastic General Stands One 6-sided Die