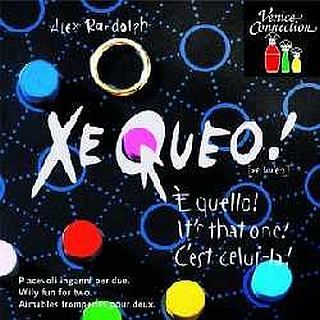 Seven tokens of seven different colors and one ring are placed randomly on eight spaces of a seven-by-seven grid. Each player has seven disks that correspond to each of the seven tokens. At the start of a round, each player secretly selects one of the seven tokens. (The disks are used to do this.) You may do the following on your turn: Move any of the tokens Chinese Checkers-style towards the ring Guess which token your opponent has chosen You win the round by: Moving the token you have chosen into the ring Correctly guessing which token your opponent has chosen Choosing the same token as your opponent, and having your opponent move that token into the ring Best out of seven rounds wins the game. Ages 10 and up