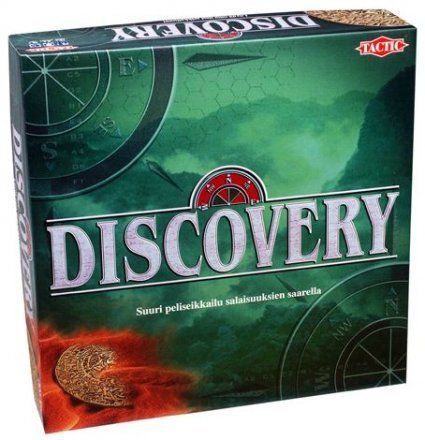 Discovery (also sold as Destination Tresor in French, and Discovery Island in Sweden) is an interesting deduction game of discovery. Each player begins in an unknown location on an island (the opponent picks where the other starts), and each has the same goal: find the hidden treasure. The treasure is hidden in one of 28 spots on the island, and there are 7 clues available in special checkpoints to help determine where it is. The island is made up of 5 different types of terrain, and for each type of terrain there is a set of corresponding hexes. In play, one player calls a direction (Northeast, South, etc.) and the other player (who knows where you are) reveals a hex on the type of terrain you just stepped into. On the back of the hex there is a number, showing how many hours have been used. Each turn, a player gets 12 hours worth of movement. By moving this way, you can eventually figure out where you are and then start moving with more accuracy. The game uses a clever device that reveals only one spot of a 6 x 6 matrix. A card, from a large set, is initially placed and this determines where the treasure will be for that game. When players get to a checkpoint, they can reveal that spot on the card to get a clue. The clues can tell you which of 4 types of treasure spots is "live", and also the six surrounding terrain types. The board is well designed so that with a few clues you can narrow down the options of spots.