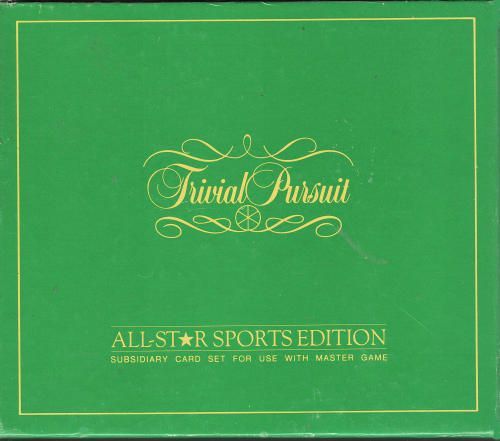 A subsidiary card set for Trivial Pursuit featuring all Sports questions. The expansion consists only of two boxes of cards; a Master Game (including the board and game pieces) is required to play. The question categories are: Nicknames Baseball Football Basketball or Hockey Catch All Numbers American and Canadian versions of the expansion were both published in 1983. The brown category in the U.S. edition is Basketball. In the Canadian it is Hockey. It is unknown whether questions in the other five categories were changed. The boxes of the two versions are slightly different. In the American version, the letter A in the word "Star" is replaced by a star. In the Canadian, a maple leaf. The Canadian version also omits the Selchow & Righter logo and related indicia from the side of the box.