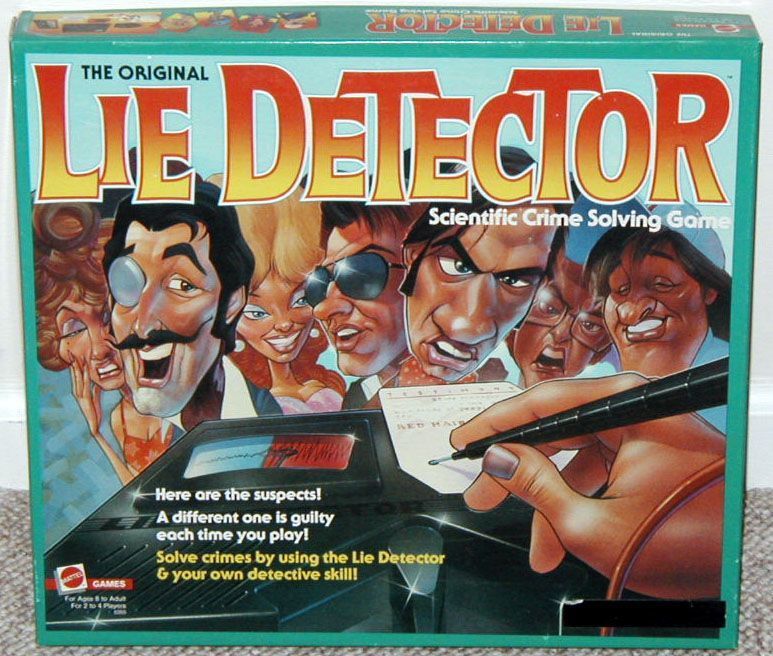 Lie Detector includes a small plastic non-electronic 'Lie Detector Machine', a plastic peg board for keeping score, and numerous 'Arrest', 'Summons', 'Secret Information', and 'Suspect' cards. Of the 24 suspects, one of them has committed a crime. The players have a number of turns to find the guilty party by interrogating suspects with the Lie Detector machine. To play Lie Detector, the Suspect cards are divided among the game players. One of the six square 'Guilty' cards is inserted into the back of the Lie Detector machine so that no one knows which suspect is the criminal; each 'Guilty' card has four suspects on it, with the guilty suspect being determined by the orientation in which the card is inserted. On their turn, each player questions a suspect by taking the suspect's card, placing it over the front of the Lie Detector and inserting the Lie Detector's wand through a hole in the card and into the Lie Detector itself. If the testimony is false, a bell rings and a needle on the machine points to "False". If it is true, no bell rings and the needle points to "True". (e.g. - The Racketeer says "the Suspect has a 'Big Jaw'... if it comes up 'True' you know that one of the six suspects with a big jaw committed the crime) Also included in the game are special 'Secret Information' cards. These cards have testimony that is known only to the player who own the cards. By process of elimination, the suspects are narrowed down, until a player feels confident that he can make a successful accusation and 'make an arrest'. He checks the guilty card in the machine. If he is right, he gets 5 points plus bonus points for the number of face-up suspects still showing on the table. Additional rounds are played until one player's score is 25 points of more. Mattel re-issued this game as Spy Detector with different artwork, and it did not sell nearly as well.