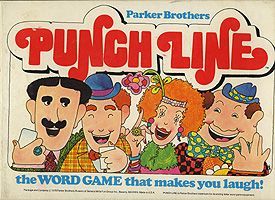 From the box: The word game that makes you laugh The object of the game is to get points for making a word that fills in the blank in a sentence. Similar to the TV game show Match Game, players are all read the same sentence with to fill in the _______. Each player has a plastic "slide holder" to hold strips of letters, which they manipulate to move the letters to the center column forming a word. Timer is set for 30 seconds. Points are scored for by points for each letter, similar to Scrabble, but also extra points for letters in specific positions, first word completed, words over 5 letters. Example in the rules: "It was raining cats and _____." One player might have "dogs" while another has "money". My family gives extra points for specially funny answers. First player to 250 points wins.