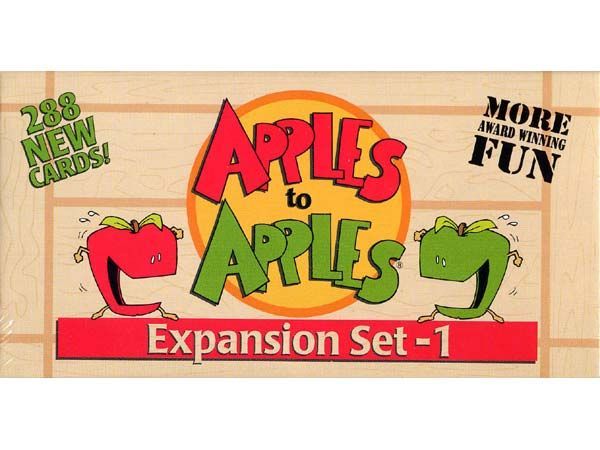 The was the first expansion to the original Apples to Apples Core Game. The expansion added 216 Green Apple cards, 72 Red Apple cards, and the following New Rules variations to the core game: Apple Turnovers Variation - For a change of taste, start by dealing five GREEN apple cards to each player. The judge turns over a RED apple card from the top of the stack. Players choose the GREEN apple card from their hand that they think is most like the word on the RED apple card. The judge then selects the GREEN apple card that he or she thinks is best, and awards the RED apple card to the person who played the selected GREEN apple card. Crab Apples Variation - For a tart twist, choose and judge red apple cards that are least like, or the opposite of, the word on the green apple card. For example, you might choose Charging Rhinos when the word Dainty is played. Baked Apples Variation - For a more leisurely and thoughful game, allow everyone, except the judge, to play a red apple card in each round. You may wish to set a time limit for each round to prevent a player from taking too much time. This expansion was discontinued when it was included with the core game for the Apples to Apples Party Box Edition. Part of the Apples to Apples Series.