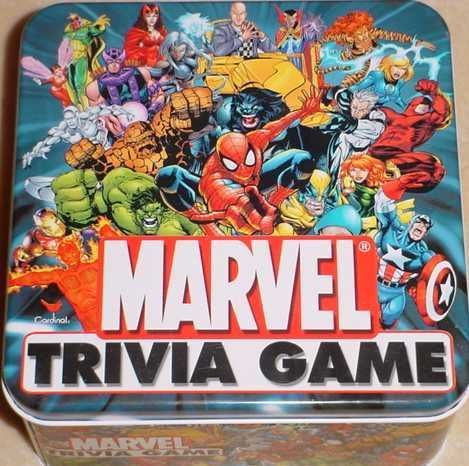 A trivia game based on the world of Marvel Comics. Each question card contains five questions of varying difficulty: Innocent Bystander - general Marvel comics knowledge Teen Side-kick - slightly better knowledge New Warrior - a newbie collector Super Hero - starting to become a comic freak Avenger - knows everything that was ever printed about the Marvel Universe Every player, or team, begins the game at the New Warrior difficulty level and is given a set of 'Power Tokens' and a Villian score sheet. On a turn a player must answer questions to 'capture' a villian and has the opportunity, by surrendering a power token, to drop a difficulty level, capture more than one villian, or challenge an opponent to advance a difficulty level. The first player to capture a pre-determined number of villians is the winner. This game entry also includes the 'Travel' version which comes in a smaller tin and has slightly simpler rules , less cards and no additional components(tokens of score sheets).