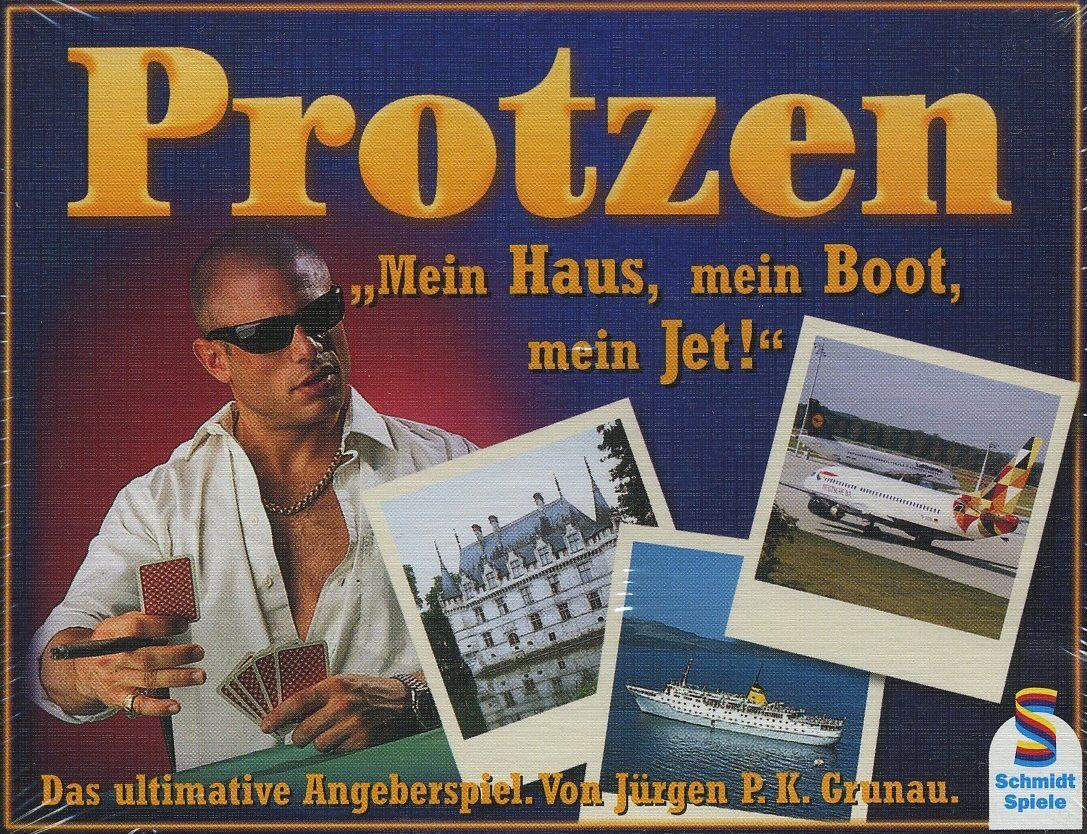 from the review: •6 suits, with cards #'d 1-9 (Polaroid snapshots on cards of various 'stuff' - houses, cars, boats •Each player also has 2000 Euros (also cards) to start the game In turn, each player is the 'Show-Off'... and plays against the table, ala Blackjack. The Show-Off is dealt 9 cards, which must have no more than 3 of one suit (re-deal if he does have more than 3 of one suit). Once the dealer has settled his hand, nine cards are dealt to the other players. Three rounds ensue... the Show Off plays 3 cards (must be different suits) and (in game theme terms) challenges the other players to out-do him with their stuff. Players play 3 cards from their hand and must do one of 3 things to "keep up with the Joneses": 1. play 2 cards which match in suit, of which one of those cards are higher in rank (3rd card does not have to match) 2. play 3 cards which do not match suits AT ALL, which the total value is higher than the Show-Off's 3 cards) 3. play 3 cards which all match in suit, regardless of value Once we've determined if any players have "kept up", we throw out all the cards played and the Show-Off lays down another 3 cards (from his now 6 card hand). Same thing happens. This is followed by the 3rd round, which consists of everyone's remaining cards. Now, to score this thing: if you can't match the Show-Off in the first round, you pay him 500 euro... if you get to round 2 but can't match there, 400 euro... round 3, 200 euro. If you match him in round 3, you get 200 euro from him for the two card match, 400 euro for the different suit match, and 500 euro for the three card match. Everyone gets to be the Show-Off one time (or more with fewer players).