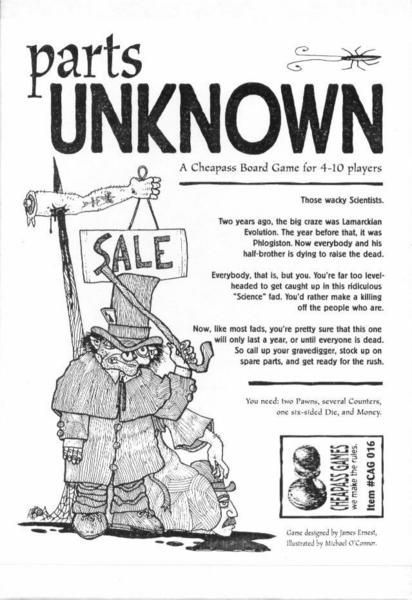 Players are retail store owners who supply body parts to the local mad scientists. Viktor, a mad scientist, goes around window shopping. Whenever he stops to look at a particular type of parts, a demand for that type of part is created; all the parts at the cheapest price get sold. If there is still a demand, all the parts at the next cheapest price get sold. This continues until demand is met. If parts sold exceed demand, a surplus is created, which may put an extra townsfolk back into the population. If the demand is not met, a shortage is created which will be filled by removing a townsfolk. Each turn, players get a part from their gravediggers, and can pay for more parts. Players can buy store shelves, and stock those shelves with parts, setting them to a specific, fixed price. If parts don't sell. the may be shuffled off to the "parts unknown" pile, which will automatically sell at certain times at a highly discounted rate. There could be, at times, a monster on the loose which scares off shoppers, getting them to buy parts only at the cheapest price, ignoring other available parts. Also, villagers might riot, which causes parts from the gravediggers to be more expensive. Player with the most money at the end of the game wins. Versions 1998 Cardstock version (Out of Print) Awards Origins Award Nominee: Best Sci Fi/Fantasy Board Game