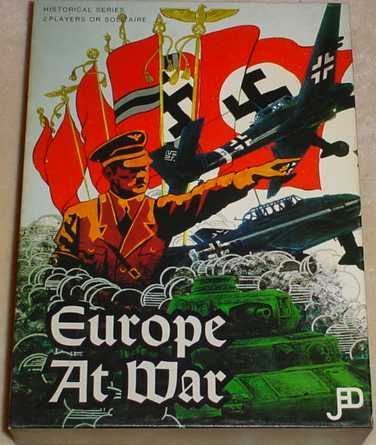 Europe at War simulates the complete war in Europe using only three pages of rules and uses the same basic game system as the introductory level War at Sea (second edition), John Edwards expanded the design to fight the entire war. The game consists of a large three panel area map of Europe, counters for each of the participants (basic troops, armor, aircraft, naval units, and leaders), and dice. Control of certain map areas is important for production, which is the first action done in the sequence of play. Players then alternate moving units, in a strict order, and have combat. Combat is simultaneous. One die is rolled for each attacking and defending unit... each roll of 6 scores a 'hit'. Losing player chooses either an aircraft/armour unit or rolls a die for army/leader losses. The winner is the player who is first to eliminate the opposition's top two leaders. (Allies: Churchill, Stalin; Axis: Hitler, Goering)