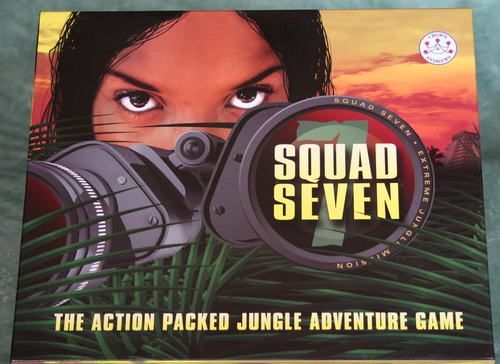 Squad Seven is an unusual action game involving a CD soundtrack and a dart-gun. Each player takes a squad of seven people into the jungle to recover Inca treasure. Players take it in turn to reveal cards, which may show treasure or various dangers of the jungle including dinosaurs, mummies and collapsing rope bridges. The soundtrack indicates whether it is day or night - certain cards may only be taken at certain times - and many cards require the player to shoot a target or run round the table before a scream is heard on the soundtrack. If they fail, they lose a member of their squad. The player who recovers the most treasure wins the game.