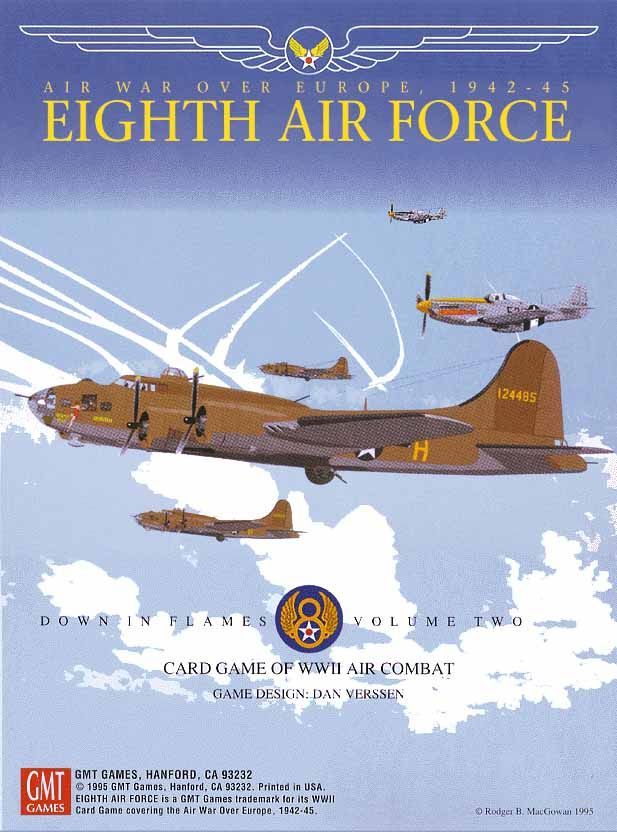 from GMT website: Eighth Air Force is a fast-action card game that allows players to experience the tension and thrill of aerial combat over Europe during World War II. Eighth Air Force provides players with the major fighter and bomber aircraft flown by the German, British, Russian and United States air forces. You'll experience the dawn of the jet age with the introduction of the German Me-262; the pressure of leading British Lancaster heavy bomber formation at night; and the maximum effort needed to sustain the wings of the United States Eighth Air Force. Included are six new Air Campaigns from the early U.S. Air Force Daylight Bombing missions of 1942 to the Royal Air Force Night Bombing missions of 1944. Also included are four famous air operations: the British Dam Busters Raid of 1943; the German 1942-43 Stalingrad Airlift; the Eighth Air Force Schweinfurt Raids of 1943; and Operation Blue Monday, the destruction of the V-1 and V-2 rocket launch sites. Note: To play Eighth Air Force, you need a copy of Rise of the Luftwaffe, Volume One in the Down in Flames Series. BGG description: Eighth Air Force extends Rise of the Luftwaffe to the second half of World War II: 1942-1945. It adds jets, altitude, heavy cannon and bombers. The rule book is designed to supersede Rise of the Luftwaffe's, with the additions peculiar to Eighth Air Force discreetly marked in the margins. Of the remaining Down in Flames series, Zero! was published in 2001 and covers the Pacific theatre of the first half of WW2. Corsairs and Hellcats is the 4th game in the series (Pacific theatre, 1942-1945). Flying Circus (WW1) has been mentioned as a similar game set during WWI, but it is not listed on the GMT Games website.