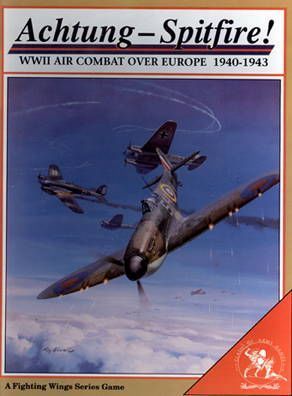 Second of J.D. Webster's World War II air combat wargames Fighting Wings series. Tactical WW2 Air Combat game with mechanics upgraded from Over the Reich (first game in series). Focuses on air to air and air to ground combat during the Battle of Britain with some before (Battle of France) and some afterward (Western Europe through 1942). Mechanics are based on fairly realistic energy physics. Aircraft capabilities modeled closely on differences between the performance of the aircraft. A turn represents 4.1 seconds; a hex represents 100 yards. The game system is more complex than the other games of this type of combat such as Mustangs or Dauntless/Air Force Dauntless Expansion Kit. The system includes an operational scale to handle flying an entire mission.