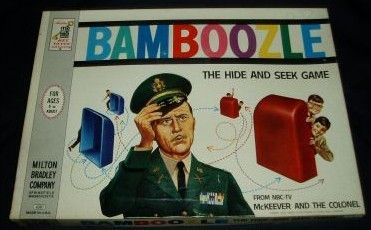 From the box: Bamboozle - The Hide and Seek game with McKeever and the Colonel as seen on NBC TV. The game board is a symmetric 'battlefield', each side containing 6 huts connected by pathways. A Grey path separates the Red and Blue sides of the board. Each player starts the game with eight pieces: two marked 1 (which move one space per turn), three marked 2 (which move two spaces) and three marked 3 (which move three spaces). These are also the victory point values of the pieces. A screen is placed between the two sides and each player places their eight 'men' into one of the six huts (some huts may be left empty). Once all pieces are placed, the screen is removed and the game begins. On his turn, a player may 'start' a piece (by moving it from a hut) or move an active piece the number of spaces equal to it's value. If a piece can reach an opponent by exact count, the opponent's piece is captured and removed from the game. If a piece reaches a hut, the opponent MUST start a piece from the hut on his next turn (if a piece is hidden there). The game ends when one player moves 10 points worth of pieces across the Grey center path or, if both players have less than 10, all of his pieces (they highest total wins).