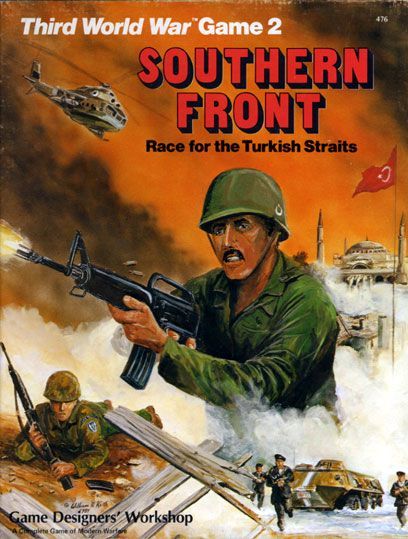 Southern Front: Race for the Turkish Straits: Game Two in the Third World War series, although it uses the same rules, is very different from its parent. Bulgaria and Romania, reinforced with three Soviet armies and special-capability forces, face Greece, Turkey, and Yugoslavia, thinly reinforced with a few elite units from the U.S., France, and Italy. The campaign is very mobile, with neither side having enough troops to cover a solid front (although the mountainous terrain of the area helps somewhat). Special units such as airmobile, airborne, and amphibious troops, with their abilities to outflank a line, become even more important. Another important feature is the tangled web of Balkan politics, Romania is the least reliable of the Pact countries, and its participation is half-hearted at best. A second scenario allows for its total neutrality, forcing the Soviets to reinforce their armies and invade before taking on NATO. Greece and Turkey are uneasy allies, and rules allow for Greek withdrawal from NATO. And Albania is completely unpredictable. Additional rules allow Southern Front to be combined with The Third World War; players can reinforce one front with forces from the other, requiring a host of new decisions on the strategic level. One or two new divisions or air units sent to the Balkans can turn the tide there, but at what cost to the main front, where every unit is desperately needed ?