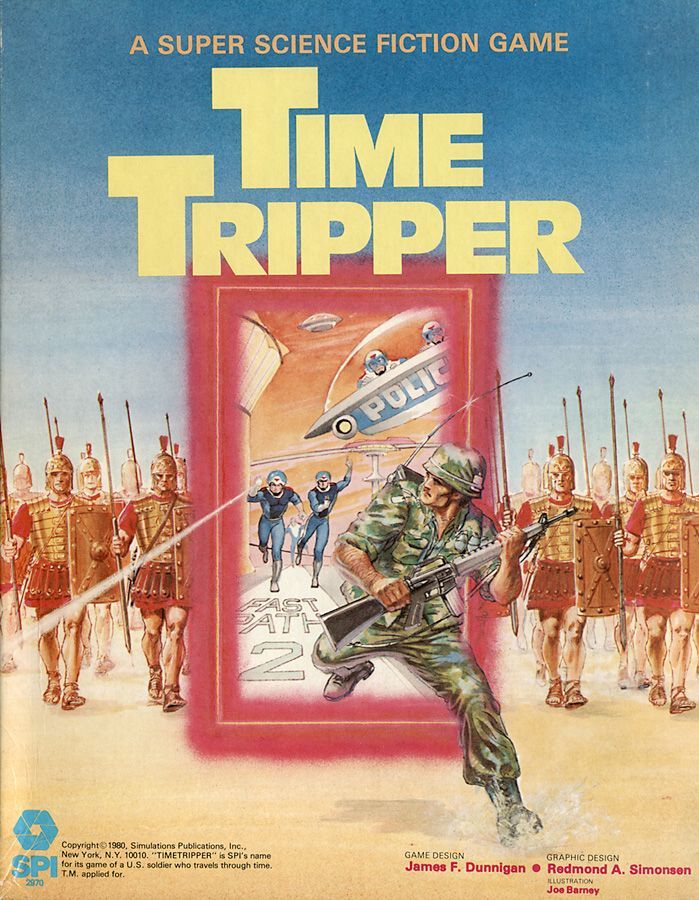 !!!TimeTripper!!! is a cooperative or solitaire game in which a Vietnam era squad or single soldier is teleported through time and space to battle everything from T-Rexes to Hell's Angels to Psionic Flesh Eating Plants. From an SPI advert in 1980: TimeTripper simulates the adventures of a U.S. infantryman, who accidentally creates a time warp that transports him to famous battles of the past and to fantastic battles of the future. Though armed with modern weaponry, the TimeTripper must husband his resources as he encounters the fearsome Tyranosaurus Rex, the Greek hoplites, Nazi infantry, and the futuristic Timepolice. Rules cover travel through time, missile and melee combat, endurance and experience; the game also includes rules for TeamTripper play and for a Timemaster. TimeTripper includes an 11' x 17' sheet with Battlefield and Time Displays, 100 cardboard playing pieces, rules and playing aids. Buyers Guide for TimeTripper Age Range: 12 years through adult Number of players: 1 to 4 (highly suitable for solitaire) Average playing time: One to three hours Complexity: Moderate (3.2) For purposes of comparison; the game of Monopoly is considered to have a complexity rating of 2.34