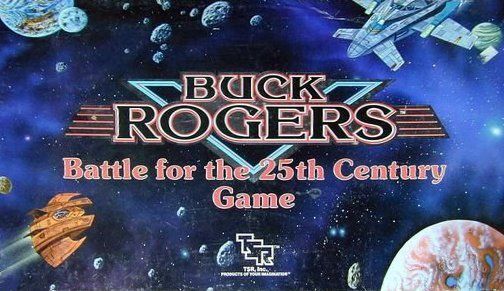 Fight for control of the twenty-fifth century Inner Solar System as imagined in the 1950s in this strategy game which is a close relative of Axis & Allies. The map board's Solar System Display keeps track of the 4 inner planets (Mercury through Mars) and the 9 larger asteroids along their orbits. The rest of the board is taken up by the various territorial displays; the larger planets are subdivided, plus there is Deimos around Mars, the Moon, L-4 and L-5 around Earth and Mercury's two artificial satellites --for a total of 42 territories. Leader Characters each have special powers. Troopers represent the grunts --infantry workhorses and cannon fodder. "Gennies" are Genetically Engineered fighters; they are stronger than Troopers but cannot leave the planet for which they were designed. Transport ships carry troops and factories between planets. War ships come as Fighters and Battlers (i.e., Bombers). Killer Satellites play the role of air defense. Factories make all these pieces - although you do have a Black Market option. As the planets move through their orbits you must plan your own moves well in advance to exploit planetary conjunctions. The movement rules consider not only the ship movements in the planet's orbits, but also the respective revolutions of the planets around the sun, and allow players to plan some nice surprises when two planets are near one another, which usually happens only once or twice in the game. Upgraded by: Buck Rogers 2.0