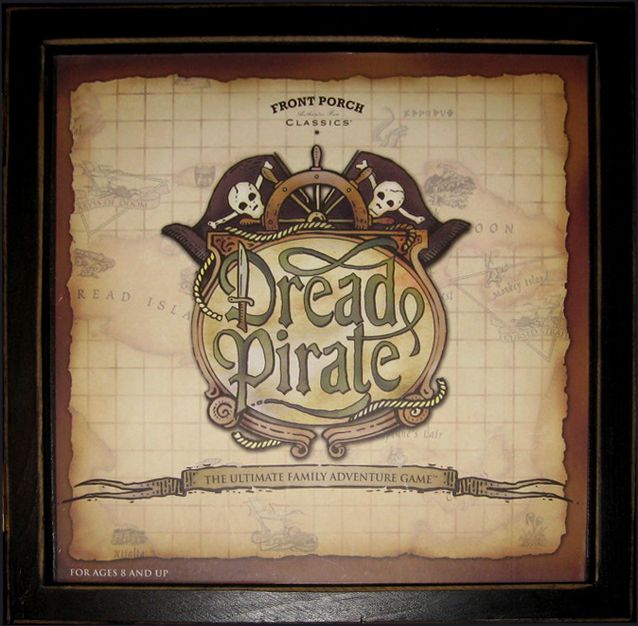 Dread Pirate is an elegantly presented family game focusing on pirate lore and like any good Pirate the one with the most loot wins. Each of the pirates start in their own port with a few doubloons and jewels of their own color. The rest of that color of jewel are piled near their port and the remaining doubloons are piled on “Dread Island” in the center of the map, along with the ‘fate’ cards that are drawn when sailing through specific marked areas of the board. It is these pirates goal to sail to the other ports and either raid or trade for jewels of the other colors. Once a pirate has at least one jewel of each color they can land on that Dread Island and collect some free doubloons. "Skirmishes"can be had with other pirates at sea and may slow the journey, but the reward of treasure can be great. Once all the jewels are gone from the original piles in the home ports (some will accumulate on Dread Island), the game is over and everyone counts the swag in their pouch. The 2002 Signature Edition of this game is packaged in a wooden treasure chest and includes a board in the form of an aged treasure map, three knuckle bones (dice), four treasure sacks, four die cast metal ships, one wind cube, fifty-two Dread Pirate cards, four map cards, fifty replica doubloons, 120 treasure jewels, 1st Edition rulebook, and captain’s log. The "2003 Signature Edition" is identical with the exception that it only has 100 jewels, and a 2nd Edition Rulebook. The "2007 Signature Edition" differences are that it has a 3rd Edition rulebook, a Jolly Roger flag, and the four map cards are discontinued. It also has a map with extra anchor icons that is identical with Buccaneer's Revenge, and a black wooden chest instead of a brown one. It is also marked "copyright Sababa Group", instead of Front Porch Classics. The Bookshelf Edition is packaged in a wooden bookshelf box and includes all of the components of the 2003 Signature Edition, plus a Jolly Roger flag. The rulebook is marked "Bookshelf Edition". The Copyright 2003 Bookshelf edition rulebook is identical to the 2nd edition treasure chest rules, and copyright 2007 Bookshelf games rulebooks correspond to the 3rd edition treasure chest rules.