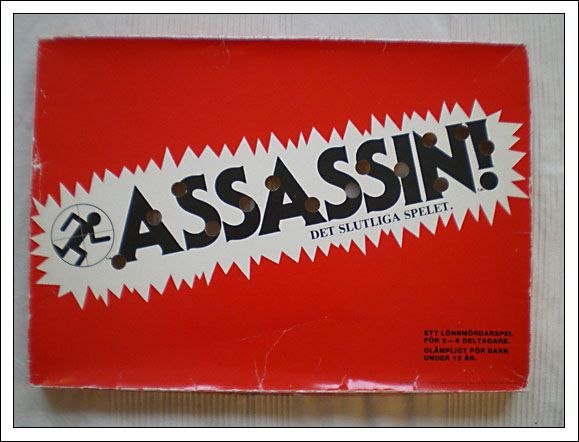 The object of the game is to arrange the assassination of all opposing players and thereby take control of world traffic in illegally obtained commodities (drugs, plutonium, munitions, oil, secrets, diamonds and gold). As you move around the board, you can buy and sell the commodities as indicated in each city. All cards cost the same but have varying resale values (some are even worthless). Complete sets are worth more, and some commodities are worth more than others. Assassination can be attempted if you land on one of the two Assassination squares, on the same square as your victim, or once per go around the board if you have enough money (500 k$, forfeiting your turn to do so). Hired Assassins come in three classes (A through C), the cheaper being less proficient in weaponry than the more expensive ones (A: five weapons; C: three weapons). Assassinations are resolved by drawing an Assassin card and comparing it with a Location card; each location lists permissible weapons --if the assassin isn't proficient with at least one of those, too bad. If he is, you draw a Weapon card to see if he managed to find/smuggle one of the needed weapons. Assuming the three cards show a match, the designated weapon(s) lists a number that needs to be matched on the dice. An assassinated player is eliminated. To defend, you may offer 1 M$ to the player who ordered the assassination just before the dice are rolled, or you may hire an assassin of your own as a bodyguard.