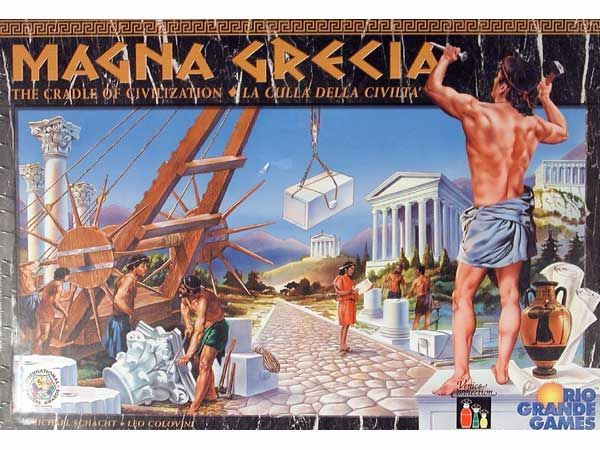 From spielbox-online.de, translated via altavista babel fish (with a lot of manual tweaks): Magna Grecia (The cradle of the civilization) is the main attraction of the year with Clementoni. The game is a joint work of Leo Colovini and Michael Schacht. The southern region of Italy was called Magna Grecia and was settled 2,500 years ago by Greek merchants and adventurers. Before the arrival of the Greeks, the country was inhabited by only a few small tribes. Fruitful soil, navigable rivers, large forests, and bronze and silver mines offered enormous development possibilities. Larger cities developed, such as Tarantum, Syracuse, Katane, Locri, and Naxos. In addition, there were numerous villages of which no trace remains. A local road system promoted trade, and rich markets developed in the cities. More and more rivalries between the cities arose, particularly over control of the Oracle, which represented an important source for fame and wealth. Sufficient material for an evening of play. Each player must successfully settle and develop Magna Grecia. At favorable points, markets are built, villages are developed into cities and interconnected by a road system. Only thus may the interior be opened and the Oracle controlled. Constructing your own large city is often very expensive, and it is sometimes worthwhile to build instead in the neutral villages or opponents' cities. The board is covered with a hexagon grid on which pieces of road, towns, or markets are placed. A game is 12 rounds long. Each round is determined by an action map, which is set up at the beginning of play according to a certain pattern. The map specifies the player sequence and indicates to which extent the three basic actions (road construction, city building, and supply) may be used. There are also, of course, certain building rules to be considered. Additionally, markets can be established, the value of which depends on the number of connected locations. The Oracle is shown on the board. In order to control the Oracle, a player must connect one of his own cities to it by road. But if several cities are connected to an Oracle, the most important city takes precedence, determined by the number of locations connected to the city (not including Oracles). Markets and the Oracle determine when the game ends.