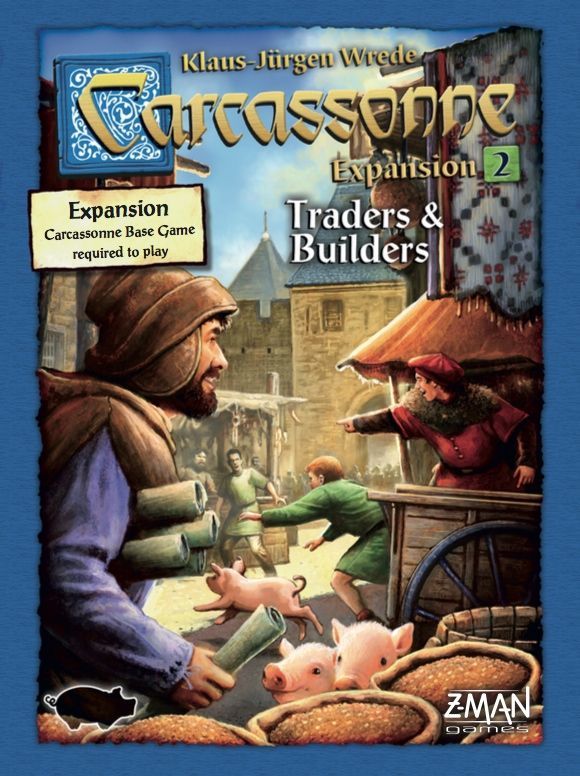 The second major expansion to the original game of Carcassonne, Traders & Builders contains 24 tiles with new features such as Bridges and Cities. Some tiles also feature symbols for the goods Wine, Cloth and Wheat. Players collect one of these goods when the feature that has it on the tile is scored. Players with the most of each type of good gets bonus points at the end of the game. There is a popular house rule that allows the trading of goods between players in exchange for other goods and the ability to chose where a tile is placed. There are also two new wooden playing pieces in this expansion. The Builder is like a meeple in that it may be placed in a city or road as a kind of supervisor. A subsequent tile extension of the feature the Builder is in allows the player another tile placement. Farmers will also be able to place a new Pig pawn in a field for extra points at the end of the game. Finally, Traders & Builders comes with a large cloth bag. Not only does this makes it easier to keep and handle the tiles, but it also removes the problem of having non-identical backsides. Carcassonne: Traders & Builders Expansion Play Summary Traders - Some of the new city tiles depict goods: wine, grain and/or cloth. When you complete a city, your own or someone else's, you collect a matching token for each good in the city. At game end, whoever has the most goods in each category scores an additional 10 points. Builders - Each player receives a builder meeple in his color. You can add your builder to any city or road you already have in progress. Now anytime you add a tile to that city or road, you immediately get to take another turn. The builder does not count as a follower for determining control of a city or road. Pig - You can add your pig to one of your farms to enrich its value. A farm with a pig scores 4 points per completed city served instead of the usual 3. Traders & Builders is playable with or without the first expansion. Part of the Carcassonne series Some versions of HiG Scandinavian release, blue box, has The River I included.