Hordes of the Things - Universal Statistics 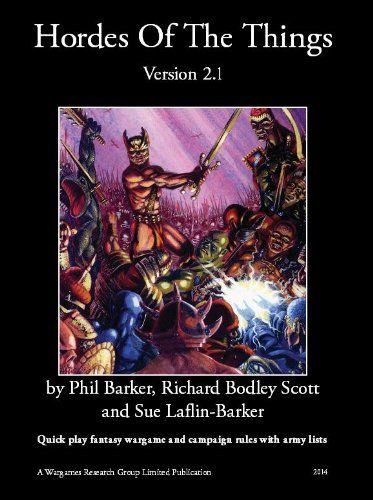 A fantasy miniatures game that is based on the same system as De Bellis Antiquitatis and De Bellis Multitudinis. The first edition was published in 1991, with a much more clearly written second edition being published in 2002. The game consists of a single rulebook. The player's miniatures are organized onto stands or 'elements', an army consisting of about 10-14 such elements. Troop types range from powerful Heroes, Magicians, and Dragons, through such things as Blades, Riders, and Spears and down to the humble Hordes of the game title. Movement is alternate, with each player dicing for action points (PIPs) which allow them to move single elements or groups of elements, deploy certain element types and use magicians to be-spell enemy troops. Combat between elements is resolved by each player rolling a die and adding the element's combat factor. Highest score wins, with some elements automatically destroying others and most others being destroyed if their final score is half, or less, than that of the opponent. The strength of the game is that there are no 'fixed' armies. With only a few restrictions (concerned with which elements can be generals and the proportion of 'powerful' troop types) you can construct your army any way you wish. This means you can create armies to represent those from any work of fantasy fiction, myth, legend, film, TV, anything else that your imagination desires. A large number of example army lists, from a variety of sources, are included in the rules book.