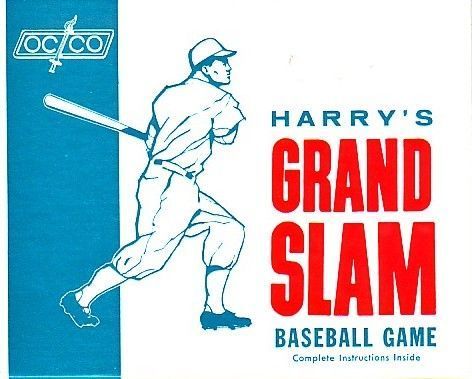 Part of the publisher's Heirloom Games Series, this is a reproduction of a game first printed in 1962. OVERVIEW Harry’s Grand Slam Baseball Game simulates a real baseball game. The Visiting Team bats in the top half of each of the nine innings and the Home Team, in the bottom half. Runners move around the bases, and runs and innings are recorded on a stand-up scoreboard screen. The game uses a special deck of 54 cards, which represent typical baseball plays. When a manager’s team is at bat, that manager will try to play cards that will help score runs. When not at bat, that manager will try to play cards that will result in outs for the other team. The designer on his original edition: "The scoring rules are simple and logical, and differ only slightly from the official rules of baseball. The elements of luck and skill are balanced carefully, so as to make each game an interesting and different contest." The game includes rules for the Heirloom edition as well as the original 1962 rules, which contain instructions for playing with 3 or 4 players plus "Slugfest" and "Shutout" variants. GAMEPLAY Each player draws a hand of 3 cards, which when played will result in a play result. At the beginning of each half inning, the batting team plays a card for the first batter. The play is then resolved and the player draws a card to bring his hand back to three. The pitching team then plays a card to derive a result for the second batter and draws a card to replace into his hand. Play goes like this until three outs are made. There are two different types of special cards in the game. Substitute cards, when drawn, are immediately played face up in front of the player drawing them, along with another card drawn from the deck and placed, unseen, on top of it. A player may use the substitute card as a "pinch hitter" or "relief pitcher" in the game when his hand does not have a useful card (i.e. a hit when he is at bat or an out when he is pitching). The substitute card is then flipped over and played. Wild cards are those which only affect base runners and do not resolve an at bat (e.g. wild pitch, passed ball, stolen base, balk). When one of these cards is played, the result is noted, but then play passes back to the opponent, who will play a card to resolve the at bat. After every three innings, both players return their hands to the deck, reshuffle the deck, and receive a new hand of three cards. After nine innings, whoever has the most runs is the winner.