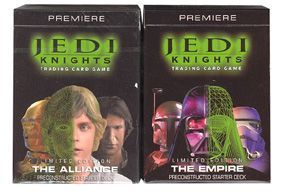 Each player must first construct decks using cards of their choosing. One player represents the ALLIANCE and the other is the EMPIRE. Each game of Jedi Knights writes its own Star Wars story. Battles rage across the galaxy as players clash in space with orbiting starships and on planets in character-to-character firefights. Player who wins control of three planets controls the universe and wins the game. If an opponent steals away one or two planets the game enters a final conflict stage, which uses the resources won from the first three planets combined with their remaining cards. Both sides must battle until only one player remains on the fourth and final planet. That player is the winner.