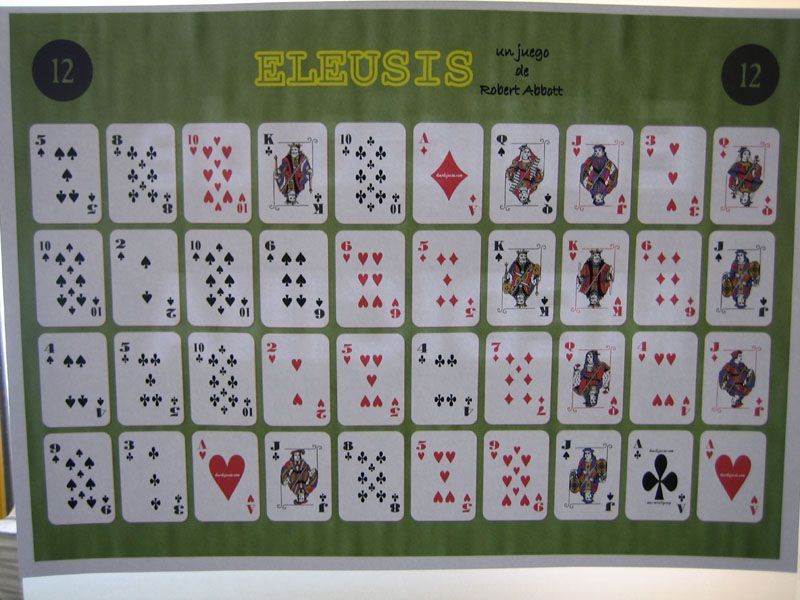 Eleusis (and later New Eleusis, 1976) is a card game that simulates the scientific method in action. You need two packs of cards, a table and some paper and pencil to play. The 4-8 player range works best. One player ("God", "Nature" or the "Demiurge") thinks up a rule (a "law of nature") that governs the correct play of the cards. Usually, the rule only involves the most recently correctly-played card, but it can be more complex. The other players ("Scientists") take turns playing cards ("performing experiments") and race one another to see who can come up with a good hypothesis about the rule. The first player to correctly deduce the rule scores big; God also scores based on how long it took for the players to figure the rule out. God should not choose a rule that is so hard to find out that nobody does, because then he doesn't score. Additionally, a player with an hypothesis can declare himself to be a "prophet" who can predict the results of the other player's experiments. Other players can then try to bring about the overthrow of the prophet by trying to find experiments whose results cannot be predicted (falsification), thus gaining a chance to become prophet themselves. A very simple rule would be "Alternate between black and red cards". A simple but hard to discover rule would be "Alternate between cards which have closed loops in their number or letter designations (e.g. 4, Q), and cards which don't (e.g. 2, K)". The game was first published in Martin Gardner's Scientific American column in June 1959. A revised version appeared in Gardner's July 1977 Scientific American column.