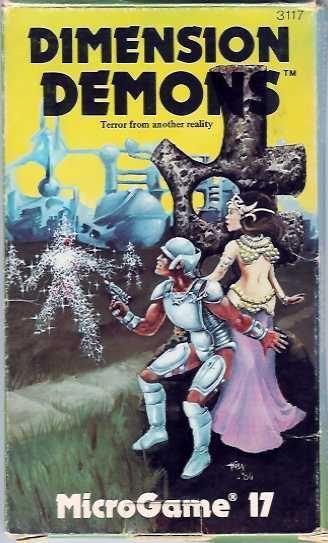 Microgame #17 in the Metagaming Microgames series. A basic chits, hexes and odds-ratio CRT based wargame. To represent the two dimensions, there are two hexes with the same number on each side of the mapboard -- representing the position in each dimension, with "pop-over" possibly happening, either voluntarily or involuntarily. From the box: They came from another universe, ruthless aliens too horrible for humans to look upon. They came to kill and to breed more of their murderous kind. Demons, they were called, hellish denizens of a hellish dimension. Dimension Demons pits invading Demons against the defending Freefeet militia of Ishom. The game features a dual map system to represent dimensions. Victory goes to the player who can control Trans-Dimensional Projection and breeding of new Demons. You must defeat the nefarious minions of the evil dimension or try to subjugate the human infestation of Ishom. The universe depends on it!