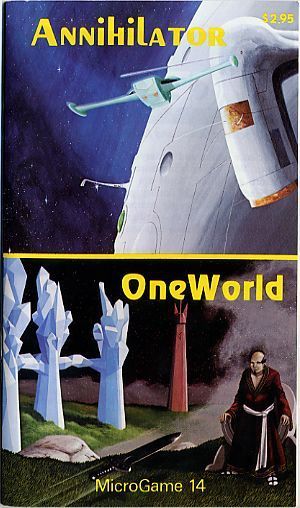 Microgame #14 in the Metagaming Microgames series. This is actually 2 games in one: One world is the game of godly conflict for those who've dreamed secretly of divine power. Each player is a god who must contend with a pretentious challenger. Your "children" wage the struggle in their aspects of Blade, Stone, and Fog. Over the Singing Grasses, Runelines, the Faults of Chaos and on the Crystal Pylons the battle rages. OneWorld is a fast playing, humorous game, which features a diceless combat system. This is an excellent game for starters or an amusing diversion for the aficionado Annihilator is a giant, planet killing, computer controlled spaceship. Pan-Human Alliance assault squads and demolition teams blast their way through the ship to get to Annihilator's brain core. The ship has security robots, repair bots, and automatic defenses to stop the humans.