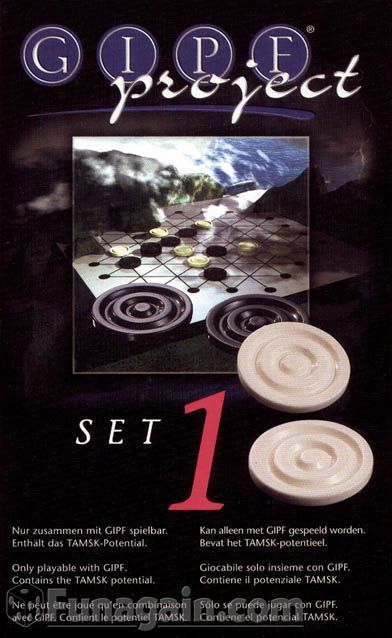 This is an expansion for GIPF. Contents: 6 TAMSK-potentials for each player See the project GIPF wiki page for more details on the potentials' powers. The TAMSK-potential is the first additional piece of project GIPF. It is named after the game TAMSK and offers new ways to play GIPF. The TAMSK-potential can grant its owner an extra move during a turn. A clarifying note from designer Kris Burm about the GIPF Project expansion Set #1 and the TAMSK potentials included with the TAMSK game: As you maybe know, enclosed in the TAMSK box are 3 white and 3 black TAMSK-potentials. These are samples. You need a minimum of 3 potentials of each color to get a feeling of how they change a game of GIPF. The GIPF Project Expansion Set #1 contains 12 TAMSK-potentials; 6 potentials per color is the standard number to play with. The kit is meant to give players who like playing with the potentials the possibility to get more potentials without needing to buy a second game of TAMSK. That aside, it is also meant to serve those who want to find out what potentials are all about without needing to purchase TAMSK. This is part of project GIPF. Expands: GIPF