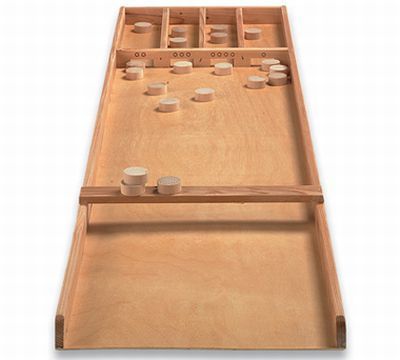 Sjoelen (Dutch) is also less commonly known as Dutch Shuffleboard (English) or Jakkolo (German). This dexterity game is particularly popular in the Netherlands, where it originated, hence Sjoelen is the official designation for the game. The World Championships are held every two years, with the most recent event in Czechoslovakia (15-16 May, 2015), and the next event planned for France (2017). Playing involves each player having three rounds of sliding 30 wooden disks along a 2 metre long table in an attempt to get them through four arches numbered 1 to 4 at the other end. Getting disks into the low scoring compartments is just as important as the high ones because each set of 4 disks in the four compartments scores double (20 instead of 10 points). Note that sjoelbak is the name of the board, not the game itself.