An Evening of Murder: The Final Act - Universal Statistics 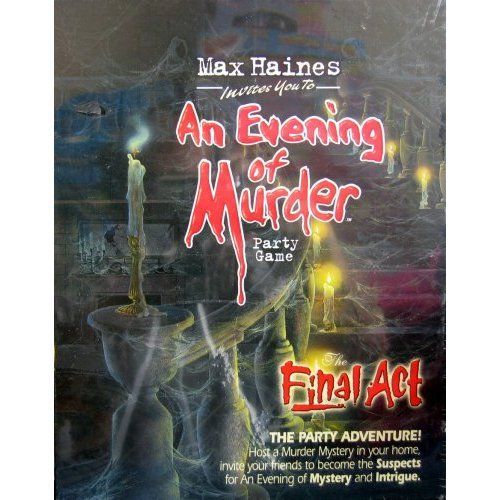 One of the titles of the "Host a Mystery" line of games. From the box: Crime Scene: Studio 13 was a deserted old studio with underground tunnels and cold damp chambers. It had been shut down for two years now, after the tragic death of Dale King, the hottest actor in Hollywood. Dale's death was ruled accidental but his younger brother, Joel King, believed Dale was murdered and set out to prove it. Joel prepared everything before hand. The props were set...the lighting and the cameras were in place...the final act was ready to begin. Joel forgot one thing, a bodyguard. At 8:00 sharp, you all entered the studio. The door slammed shut behind you. That was when you saw the body lying on the floor. He had been stabbed with a butcher knife. He was dead! The Suspects: Kimberly Gibson: A world-renowned psychic with a large celebrity clientele. Could she have been channeling her energy in the wrong direction? Warren Calvert: The host of the number one daytime talk show with scandalous titles and outrageous guests. Would murder increase his ratings? Sarah Rogers: The "Perfect" food network show host. She could plant a vegetable garden, mend a broken fence and bake a perfect pie. Could she pull off the perfect murder? Judge Rodney Wynters: The Judge Rodney 'in-your-face' courtroom drama television show was a hit. He had an abrupt no-nonsense style. Could his 'blistering sharp-tongue' cut like a knife? Layla Simpson: The hottest female movie star in Hollywood. Gorgeous, curvaceous, tantalizing...she had looks and a body that could kill! Malcolm Reynolds: The sexiest actor in Hollywood, since Dale died. How far would he go to get rid of the competition? Did he play the leading part in the murder? Connie Clarke: Editor and owner of one of the largest celebrity-driven scandal magazines. There was no limit as to what she would print. Did she take the term "character assassination" literally? Damien Phillips: A super-popular radio host. Better known as radio's shock jock. His reputation depended upon him being vulgar and cruel. He would stop at nothing, until he drew blood. Would he host his next show from prison?