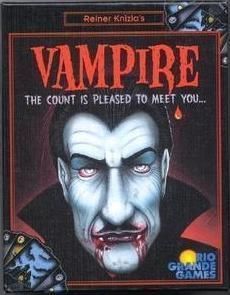 The goal of this game is to meld sets of vampires from the six different suits. Once either all the cards are drawn or one player has melds in all six suits, the game is over. The player (or players) with the weakest meld in each of the suits, and non-existent zero-melds count here, is discarded. However, all remaining cards contribute their value (either one or two) to each player's total. Some have described this game as a multi-player version of Lost Cities, which isn't a terrible comparison. Part of the Goldsieber Ã  la Carte line of games.