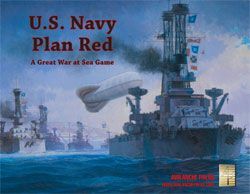 The Great War at Sea series hypothetical situation of possible naval war between US and Britain. Based on actual US navy plans. Players plot their task forces moves on the strategic map and when contact is made combat is fought on the tactical map. First Edition (2002) had four battle and nine operational scenarios. Second Edition (2013) has the same counters and map as First Edition, but has a completely revised scenario book with 14 battle and 20 operational scenarios, and updated special rules. Cover has been updated as well.