How to Host a Murder: Hoo Hung Woo - Universal Statistics 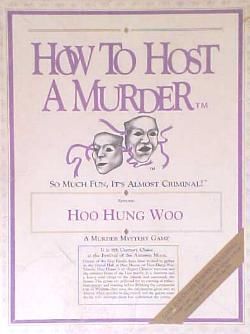 HOO HUNG WU China, Eighth-Century: The Autumn Moon Festival in eighth-century China is a time of relaxation and rejoicing. The frantic activities of the harvest have drawn to a close; crops are no longer at risk to weather and calamity; the peace of winter is about to descend. It is a time of transition. In the Chinese district of Chi-Ka and in its principal city of Chi-Ka-Go, the festival is an occasion for fireworks, parades, music and gaiety. Traditionally, the Festival of the Autumn Moon is also an occasion for reflection and thanksgiving. In many households, the entire family gathers and an elaborate feast is prepared. Effigies representing Happiness, Wealth and Long Life are displayed, and some families, recalling the ancient traditions, conclude the celebration with a bonfire in which the effigies are burned, their smoke rising to the heavens to signify gratitude and respect. Two of the wealthiest families of the district, the Wu and the Hoo families, have for many generations celebrated the festival together. This year both families' leaders, their women, and a few prominent guests will meet one day in advance of the festival to enjoy an elaborate feast, drink from the ceremonial Cup of Wisdom, recite poetry and contemplate the events of the past year. Children and less prominent family members will arrive the next day, the day of the festival, for feasting, revelry and, after sunset, lighting the Fire of Gratefulness. The site of the gathering and festival celebration this year will be the Hoo summer home at Hoo Hung Wu. A small group of islands situated in the middle of the great river Mi-Si-Pi, Hoo Hung Wu is co-owned by the Hoos and Wus, but only the Hoos have occupied it. They have built several buildings on the West Isle, including their summer home, Hoo House. East Isle is not occupied, though the Hoos maintain its roads and bridges. Hoo House is a magnificent dwelling in a pleasant forest setting. Several wings contain rooms for many guests and servants. Through the years the Hoos have also built smaller dwellings on West Isle where family members, or guests, who desire seclusion may find it. CHARACTERS Hoo Li-gan, General Shang Hai-shek, Hao Dee-doo, Pen Ta-gon, Wee Ping, called "Willow Blossom", Wu Pi, called "Joyous Flower", Hoo Ting, called "Jade Owl", and Ding Ling, called "Silver Bell".