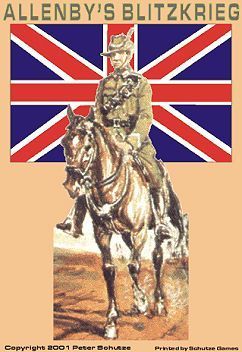 The last cavalry crusade This is a 2 player game on the last great horse cavalry campaign in history. The game covers the first 48 hours of the offensive launched by General Edmund Allenby's army on the 19th September 1918 in northern Palestine (now Israel). The battle commenced just before dawn on the 19th after a brilliant deception operation that ensured that the Turks were out of place. It pitted a British army consisting mostly of Indian and Australian troops against the Ottoman Turks. The speed at which the British army's mounted units moved and the distances they covered during the 48 hours and immediately afterwards, exceeded the best efforts of the Germans in any of their WW2 "Blitzkriegs." COMPONENTS 11x17 inch map representing northern Palestine. 154 double sided counters on a sticker sheet shows the forces controlled by each player and markers. One rulebook