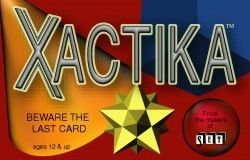 Xactika is an original card game that challenges players' ability to estimate the outcome of playing eight cards. You must predict the chances of being able to take the other players' cards that are laid down during each round. There is no drawing or discarding. You must predict exactly – hence the name Xactika – the number of rounds in which you will be able to take the cards played. Cards that appear too weak to take a trick initially may become strong enough to do so as the hand evolves. Players must recognize the value of their hand, not just from having the highest point cards in one of the four combinations on each card, but also from an understanding of the chances that for some of their other cards that no cards of the same combination may remain in the hands of the other players. Xactika, while of the same genre as Spades or Euchre, has more opportunity and takes a little more skill. To play you must examine your hand to find cards in specific combinations that have values that are greater than your opponents. Some cards are sure bets, but only if you can take the lead. Other cards have a high probability of taking a trick, but this depends upon how the cards are played by others. So, careful attention must be paid to the moves of other players. You must also arrange to play your cards so that at the end of each hand you don't get stuck with a trick you don't want. The outcome of a hand is not determined until the end of the eight rounds, so each player must keep focused on the play throughout each of the eight hands of the game. Keep on your toes, and figure out how to take, as well as avoid taking, tricks. There are a number of ways to play each hand, but finding the way to make exactly the right numbers of bids is the challenge.