Fighter-Bomber: The Game of Mustangs and Messerschmitts - Universal Statistics 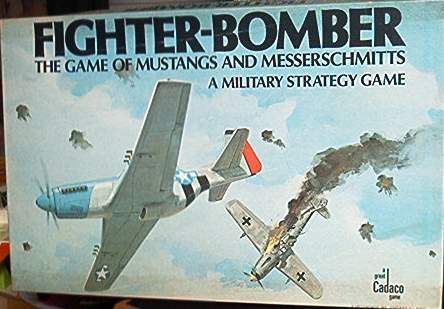 (from the box) "A Military Strategy Game" "A military game of logic, luck and tactics for 2 players" "Your assignment, strategist, is to shoot down your opponent's squadron before he gets yours!" In this aerial combat game, players must move their Fighter-Bombers across to the opposite sides of the board (the 'target areas') and release their bombs in order for their planes to gain maneuverability and become Fighters. The second goal is to use your Fighters and your friendly Flak to shoot enemy planes. As soon as your first set of three Fighter-Bombers enters the opponent's half of the board, a further three enter the game on our side. Movement is defined by three dice numbered (blank), '1' or '2' apiece, each dice defining movement for one plane. Enemy planes are shot down by 'over-flying' (jumping) them. At the end of their movement turn, intruding planes are also subject to 'flak bursts' (color form type markers preset by players on a replica of their half of the battlefield, and slid under the transparent cover sheet which covers the gameboard). Any planes sitting on 'flak bursts' after the replica map is slipped under them are destroyed! First player to succeed in shooting down his opponent's squadron of six planes wins the game!!!