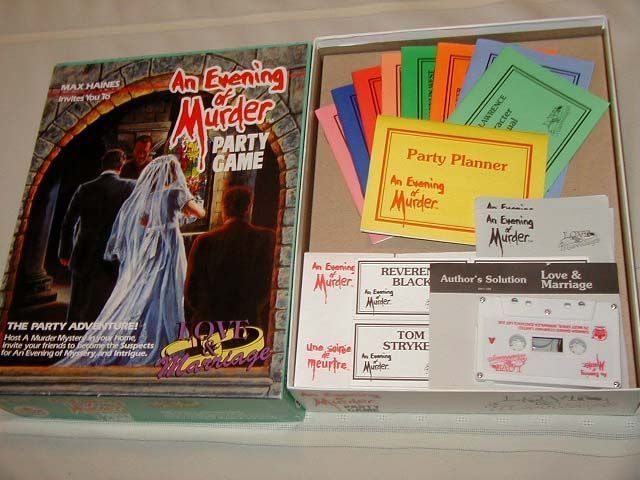 One in the series of "Max Haines Invites You To An Evening of Murder (tm)" party games. Plays like the "How to Host a Murder" series. This particular edition is Love & Marriage. From the box... Crime Scene: After ten years of marital bliss, Tom and Elaine Stryker were planning a celebratin. Family and friends gathered at a quaint country chapel to witness the happy couple renew their wedding vows. Suddenly the lights went off, a gunshot rang out and the father of the bride, slumped to the floor, dead. The honeymoon is over and you may be one of the suspects. The Suspects: Reverend Black: A popular TV Evangelist...what sins has he committed lately? Dr. Ingrid Swenson: A renowned sex therapist who knows everyone's intimate secrets. Tom Stryker: A major league baseball player...was his pitching career just a shot in the dark? Elaine Stryker: The perfect wife and mother...was she capable of the perfect murder. Colonel West: A cunning and dangerous soldier...trained to shoot first and ask questions later. Eve Thornton: A beautiful divorcee with enough money to hire a hundred hitmen? Zach Lawrence: A reporter for a trashy news tabloid. Was a poison pen his only weapon? Chelsea: The world's newest singing sensation. How far will she go to shock her diehard fans?