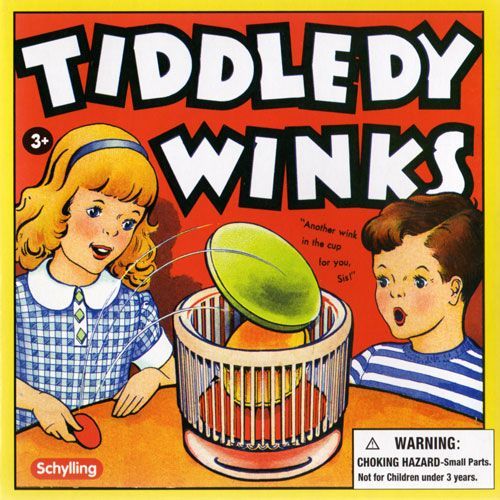 Tiddledy Winks varies based on publisher, but they all generally have a cup or other container that sits in the center of a target. The object of the game is to flip small smooth disks (the "winks") into the cup. This is accomplished by placing a wink on a piece of felt and then pressing down on the edge of the wink with a larger disk (the "tiddledy") so that the wink pops up into the air, and hopefully lands in the cup. The highest points are awarded for winks that land in the cup, with winks landing in the target area scoring less. Players decide ahead of time to play a set number of rounds (in which case the winner is the person with the highest score at the end of the last round), or to play until someone reaches a certain score (in which case the winner is the first person to reach or exceed that score). Wikipedia notes that Joseph Assheton Fincher filed the original patent application for the game in 1888, applied for the trademark Tiddledy-Winks in 1889, and licensed John Jaques and Son as the exclusive distributors of the game. However, the intense popularity of the game prompted other publishers to churn out cheaper competitors under names like Spoof, Flipperty Flop, Jumpkins, Golfette, Maro, Flutter. As early as 1890, Jacques boxes included a label warning of "worthless imitations... issued by unscrupulous and jealous persons", and its rules threatened that "proceedings will be taken against any one infringing the Proprietors' Rights in this Game".