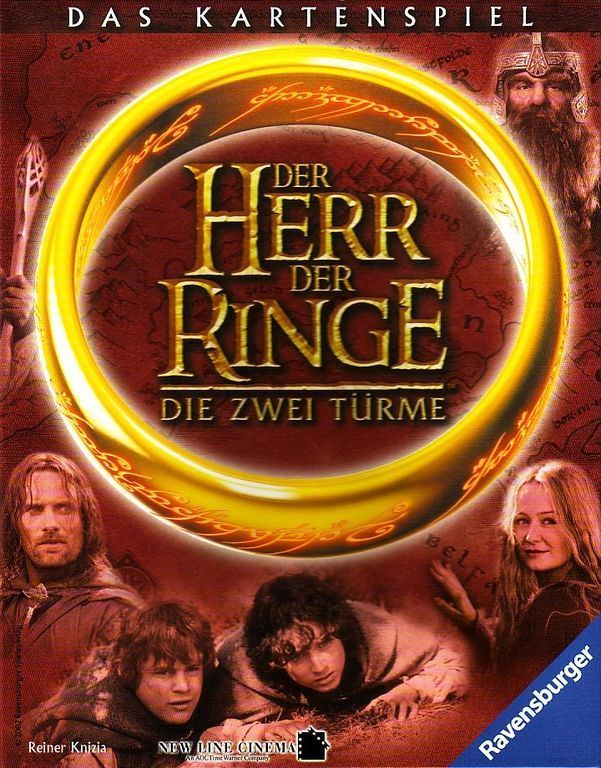 The second of the German Lord of the Rings movie tie-in games. The Hobbits Frodo, Sam, Merry and Pippin continue their journey. On their way through Middle Earth, they meet allies who help them to master new adventures. Step by step they pass the dangerous towers of the dark enemies. Each Location holds new challenges and requires strength, wisdom, endurance, or determination. The game proceeds over six rounds. Each round consists of two consecutive phases: 1. Movement phase: The Marker moves over a Path card. On the path to the individual locations, the players collect Character and Gandalf cards. 2. Scoring phase: The Marker reaches a Location. Here, each player plays, all at once, as many cards face-up in front of himself as he wishes or he passes. After all players have done this, scoring occurs. Players compare the total number of their played cards. Only cards displaying the characteristic of the current Location card and Gandalf cards played in the column with the matching characteristic are counted. Whoever has the most cards of the appropriate type takes the highest point tile at that Location and the Ring (he is the start player for the next round). The player with second-most cards of the appropriate type takes the next highest point tile and so on - the player with the fewest matching cards gets nothing. The player who has earned the most points by the end of the game wins.